A 3D surface model of an active limestone quarry and a vegetation-covered plateau was created using unmanned aerial vehicle (UAV) technique in combination with terrestrial laser scanning (TLS). The aim of the research was to identify major fault zones that dissect the inaccessible quarry faces and to prepare a model that shows the location of these fault zones at the entire study area. An additional purpose was to calculate reserves of the four identified lithological units. It was only possible to measure faults at the lowermost two meters of the quarry faces. At the upper parts of the quarry and on the vegetation-covered plateau where no field geological information was available, remote sensing was used. Former logs of core drillings were obtained for the modelling of the spatial distribution of four lithological units representing cover beds and various quality of limestone reserves. With the comparison of core data, field measurements and remote sensing, it was possible to depict major faults. Waste material volumes and limestone reserves were calculated for five blocks that are surrounded by these faults. The paper demonstrates that, with remote sensing and with localised control field measurements, it is possible: (a) to provide all geometric data of faults and (b) to create a 3D model with fault planes even at no exposure or at hardly accessible areas. The surface model with detected faults serves as a basis for calculating geological reserves. View Full-Text
Keywords: UAV; surface model; fault zone; spatial analysis; limestone reserve UAV; surface model; fault zone; spatial analysis; limestone reserve
►▼ Show Figures 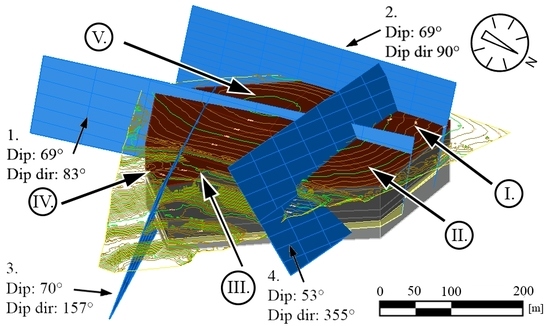