An a priori map is often unavailable for a mobile robot in a new environment. In a large-scale environment, relying on manual guidance to construct an environment map will result in a huge workload. Hence, an autonomous exploration algorithm is necessary for the mobile robot to complete the exploration actively. This study proposes an autonomous exploration and mapping method based on an incremental caching topology–grid hybrid map (TGHM). Such an algorithm can accomplish the exploration task with high efficiency and high coverage of the established map. The TGHM is a fusion of a topology map, containing the information gain and motion cost for exploration, and a grid map, representing the established map for navigation and localization. At the beginning of one exploration round, the method of candidate target point generation based on geometry rules are applied to extract the candidates quickly. Then, a TGHM is established, and the information gain is evaluated for each candidate topology node on it. Finally, the node with the best evaluation value is selected as the next target point and the topology map is updated after each motion towards it as the end of this round. Simulations and experiments were performed to benchmark the proposed algorithm in robot autonomous exploration and map construction. View Full-Text
Keywords: LIDAR detection; space exploration; topology; simultaneous localization and mapping LIDAR detection; space exploration; topology; simultaneous localization and mapping
►▼ Show Figures 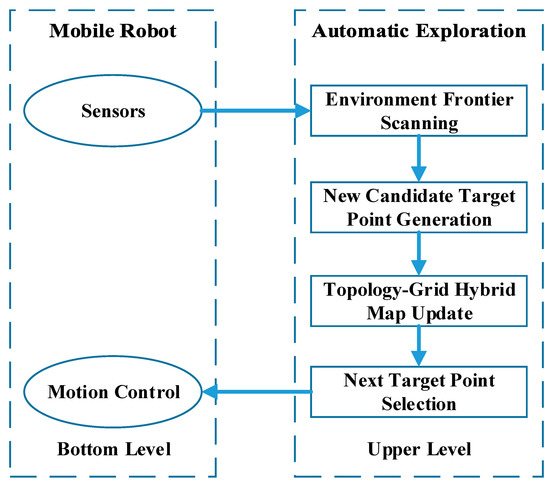