Threat assessments continue to conclude that terrorist groups and individuals as well as those wanting to cause harm to society have the ambition and increasing means to acquire unconventional weapons such as improvised nuclear explosive devices and radiological disposal devices. Such assessments are given credence by public statements of intent by such groups/persons, by reports of attempts to acquire radioactive material and by law enforcement actions which have interdicted, apprehended or prevented attempts to acquire such material. As a mechanism through which to identify radioactive materials being transported on an individual’s person, this work sought to develop a detection system that is of lower-cost, reduced form-factor and more covert than existing infrastructure, while maintaining adequate sensitivity and being retrofittable into an industry standard and widely utilised Gunnebo Speed Gate system. The system developed comprised an array of six off-set Geiger–Muller detectors positioned around the gate, alongside a single scintillator detector for spectroscopy, triggered by the systems inbuilt existing IR proximity sensor. This configuration served to not only reduce the cost for such a system but also allowed for source localisation and identification to be performed. Utilising the current setup, it was possible to detect a 1 µSv/h source carried into the Speed Gate in all test scenarios, alongside locating and spectrally analysing the material in a significant number. View Full-Text
Keywords: radiation; nuclear threat reduction; security; portal; Geiger–Muller; gateway; gamma-ray; trafficking radiation; nuclear threat reduction; security; portal; Geiger–Muller; gateway; gamma-ray; trafficking
►▼ Show Figures 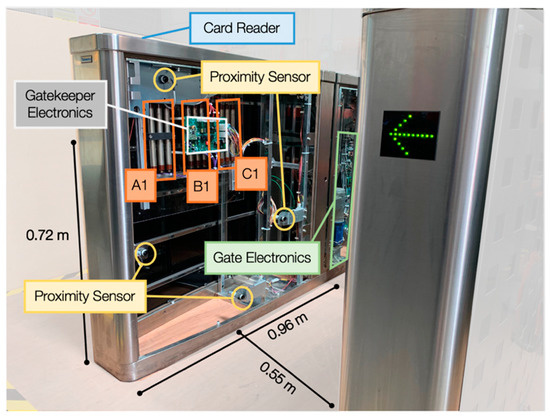