We describe the in vivo characterization of microamperometric sensors for the real-time monitoring of nitric oxide (NO) and oxygen (O2) in the striatum of immunocompromised NOD SCID mice. The latter strain has been utilized routinely in the establishment of humanized models of disease e.g., Parkinson’s disease. NOD SCID mice were implanted with highly sensitive and selective NO and O2 sensors that have been previously characterized both in vitro and in freely moving rats. Animals were systemically administered compounds that perturbed the amperometric current and confirmed sensor performance. Furthermore, the stability of the amperometric current was investigated and 24 h recordings examined. Saline injections caused transient changes in both currents that were not significant from baseline. l-NAME caused significant decreases in NO (p < 0.05) and O2 (p < 0.001) currents compared to saline. l-Arginine produced a significant increase (p < 0.001) in NO current, and chloral hydrate and Diamox (acetazolamide) caused significant increases in O2 signal (p < 0.01) compared against saline. The stability of both currents were confirmed over an eight-day period and analysis of 24-h recordings identified diurnal variations in both signals. These findings confirm the efficacy of the amperometric sensors to perform continuous and reliable recordings in immunocompromised mice. View Full-Text
Keywords: amperometry; nitric oxide; oxygen; real-time; characterization; NOD SCID; immunocompromised amperometry; nitric oxide; oxygen; real-time; characterization; NOD SCID; immunocompromised
►▼ Show Figures 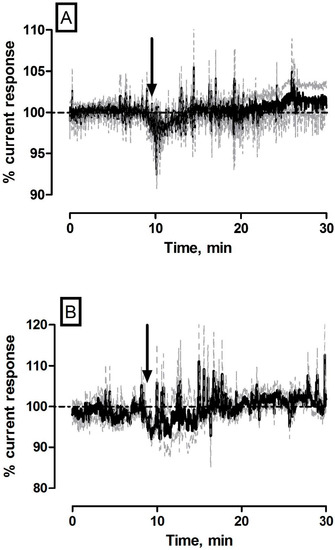