Background: Wearable magneto-inertial sensors are being increasingly used to obtain human motion measurements out of the lab, although their performance in applications requiring high accuracy, such as gait analysis, are still a subject of debate. The aim of this work was to validate a gait analysis system (H-Gait) based on magneto-inertial sensors, both in normal weight (NW) and overweight/obese (OW) subjects. The validation is performed against a reference multichannel recording system (STEP32), providing direct measurements of gait timings (through foot-switches) and joint angles in the sagittal plane (through electrogoniometers). Methods: Twenty-two young male subjects were recruited for the study (12 NW, 10 OW). After positioning body-fixed sensors of both systems, each subject was asked to walk, at a self-selected speed, over a 14-m straight path for 12 trials. Gait signals were recorded, at the same time, with the two systems. Spatio-temporal parameters, ankle, knee, and hip joint kinematics were extracted analyzing an average of 89 ± 13 gait cycles from each lower limb. Intraclass correlation coefficient and Bland-Altmann plots were used to compare H-Gait and STEP32 measurements. Changes in gait parameters and joint kinematics of OW with respect NW were also evaluated. Results: The two systems were highly consistent for cadence, while a lower agreement was found for the other spatio-temporal parameters. Ankle and knee joint kinematics is overall comparable. Joint ROMs values were slightly lower for H-Gait with respect to STEP32 for the ankle (by 1.9° for NW, and 1.6° for OW) and for the knee (by 4.1° for NW, and 1.8° for OW). More evident differences were found for hip joint, with ROMs values higher for H-Gait (by 6.8° for NW, and 9.5° for OW). NW and OW showed significant differences considering STEP32 (p = 0.0004), but not H-Gait (p = 0.06). In particular, overweight/obese subjects showed a higher cadence (55.0 vs. 52.3 strides/min) and a lower hip ROM (23.0° vs. 27.3°) than normal weight subjects. Conclusions: The two systems can be considered interchangeable for what concerns joint kinematics, except for the hip, where discrepancies were evidenced. Differences between normal and overweight/obese subjects were statistically significant using STEP32. The same tendency was observed using H-Gait. View Full-Text
Keywords: gait analysis; wearable; STEP32; H-Gait; magneto-inertial sensors; spatio-temporal parameters; joint kinematics; young; overweight; obese gait analysis; wearable; STEP32; H-Gait; magneto-inertial sensors; spatio-temporal parameters; joint kinematics; young; overweight; obese
►▼ Show Figures 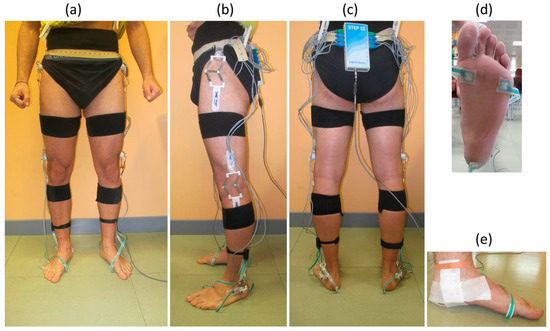