CMOS Electrochemical Instrumentation for Biosensor Microsystems: A Review
Next Article in Special Issue

Ground reaction forces and moments (GRF&M) are important measures used as input in biomechanical analysis to estimate joint kinetics, which often are used to infer information for many musculoskeletal diseases. Their assessment is conventionally achieved using laboratory-based equipment that cannot be applied in daily life monitoring. In this study, we propose a method to predict GRF&M during walking, using exclusively kinematic information from fully-ambulatory inertial motion capture (IMC). From the equations of motion, we derive the total external forces and moments. Then, we solve the indeterminacy problem during double stance using a distribution algorithm based on a smooth transition assumption. The agreement between the IMC-predicted and reference GRF&M was categorized over normal walking speed as excellent for the vertical (ρ = 0.992, rRMSE = 5.3%), anterior (ρ = 0.965, rRMSE = 9.4%) and sagittal (ρ = 0.933, rRMSE = 12.4%) GRF&M components and as strong for the lateral (ρ = 0.862, rRMSE = 13.1%), frontal (ρ = 0.710, rRMSE = 29.6%), and transverse GRF&M (ρ = 0.826, rRMSE = 18.2%). Sensitivity analysis was performed on the effect of the cut-off frequency used in the filtering of the input kinematics, as well as the threshold velocities for the gait event detection algorithm. This study was the first to use only inertial motion capture to estimate 3D GRF&M during gait, providing comparable accuracy with optical motion capture prediction. This approach enables applications that require estimation of the kinetics during walking outside the gait laboratory. View Full-Text
Keywords: ground reaction force and moment; inertial motion capture; inverse dynamics; gait analysis ground reaction force and moment; inertial motion capture; inverse dynamics; gait analysis
►▼ Show Figures 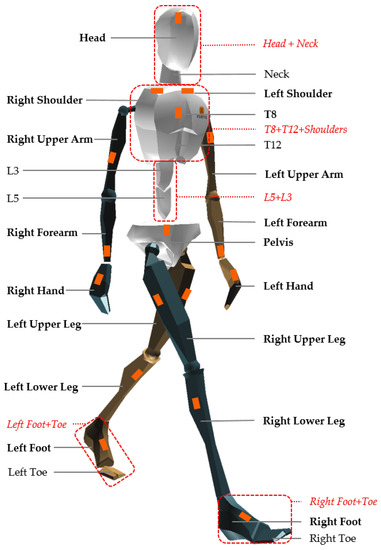