What Makes a Hot-Spring Habitat “Hot” for the Hot-Spring Snake: Distributional Data and Niche Modelling for the Genus Thermophis (Serpentes, Colubridae)
Previous Article in Special Issue

Postojna-Planina Cave System in Slovenia, a Hotspot of Subterranean Biodiversity and a Cradle of Speleobiology

The lava tubes at Undara became internationally recognised in the late 1980s, when 24 species of terrestrial cave-adapted invertebrates (troglobionts) were recorded from Bayliss Cave, making it one of the 20 richest known cave communities in the world at the time. Over the last decades, several of the Undara species have been taxonomically described and a great deal of research has been undertaken in other parts of Australia, which has revealed additional subterranean hotspots. It is therefore timely to update the list of Undara cave fauna, and to evaluate the Undara cave system in relation to other subterranean hotspots in Australia. The updated species list was compiled from the published literature and museum databases. Minimally, 78 species of arthropods have been recorded from 17 lava tube caves in the Undara Basalt. Sixteen species have been taxonomically described; 30 identified to genus and/or morpho-species; and 32 remain unidentified to species or genus level. Thirty troglobionts and one stygobiont species were recorded. Seven caves harboured obligate subterranean species; Bayliss Cave harboured the most obligate subterranean species: 23 troglobionts and one stygobiont. All these caves contained deep zone environments with high humidity, of which three also contained ‘bad air’ (CO2). The unique combination of geomorphic structure and environmental parameters (high humidity) and multiple energy sources (tree roots, bats and guano, organic material wash-in) are the main factors responsible for Bayliss Cave’s extraordinary local richness. Further research is needed to investigate CO2 as a factor influencing troglobiont richness and distribution in ‘bad air’ caves. Undara remains the richest subterranean hotspot in humid tropical Australia; however, significantly richer subterranean assemblages are found in arid and semi-arid calcrete aquifers, karst and iron-ore terrains, mostly in Western Australia. View Full-Text
Keywords: basaltic lava flow; cave ecology; arthropods; tropical cave fauna; Bayliss Cave; Psilotum basaltic lava flow; cave ecology; arthropods; tropical cave fauna; Bayliss Cave; Psilotum
►▼ Show Figures 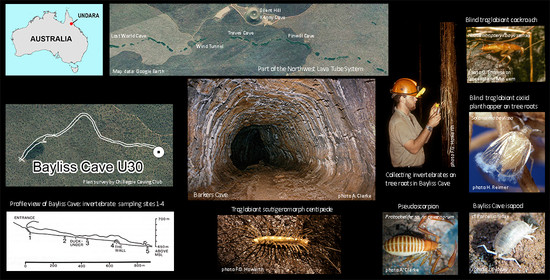