Phycological Herbaria as a Useful Tool to Monitor Long-Term Changes of Macroalgae Diversity: Some Case Studies from the Mediterranean Sea

Out of Bound: A New Threatened Harlequin Toad (Bufonidae, Atelopus) from the Outer Borders of the Guiana Shield in Central Amazonia Described through Integrative Taxonomy

We used integrative taxonomy to describe a new species of Atelopus from the lowlands of Central Amazonia in the region of Manaus, Amazonas, Brazil. The new species is geographically isolated from the southernmost species of Atelopus of the Guiana Shield. Atelopus manauensis species nova (sp. nov.) is characterized by the combination of the following characteristics: male snout-vent length range (SVL = 19.1–26.4 mm; n = 11); dorsal and lateral skin smooth; ventral surface entirely white or white with cream-colored gular region; fingers and toes lacking subarticular tubercles and fringes. The advertisement call of the new species has a call duration of 689–840 ms, contains 15–26 pulses, is emitted at an average pulse rate of 25.5 pulses per second, and has a dominant frequency ranging 3088–3610 Hz. The genetic divergence between the new species and its morphologically most similar congeners (A. spumarius and A. pulcher) is greater than 4%. Atelopus manauensis sp. nov. is closely related to species of the A. hoogmoedi complex inhabiting the Guiana Shield. The new species has a small geographic distribution (approximately 4500 km2) in a landscape that is strongly threatened by the growth of Manaus, the largest city in Brazilian Amazonia. The new species is considered critically endangered and in need of urgent conservation measures. View Full-Text
Keywords: conservation; genetics; integrative taxonomy; morphology; vocalization conservation; genetics; integrative taxonomy; morphology; vocalization
►▼ Show Figures 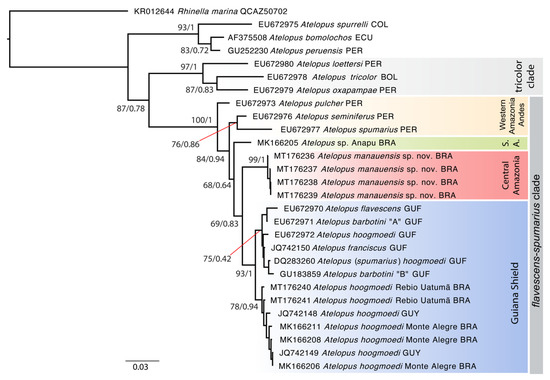