We propose to erect a new genus of terrestrial-breeding frogs of the Terrarana clade to accommodate three species from the Province La Convención, Department of Cusco, Peru previously assigned to Bryophryne: B. flammiventris, B. gymnotis, and B. mancoinca. We examined types and specimens of most species, reviewed morphological and bioacoustic characteristics, and performed molecular analyses on the largest phylogeny of Bryophryne species to date. We performed phylogenetic analysis of a dataset of concatenated sequences from fragments of the 16S rRNA and 12S rRNA genes, the protein-coding gene cytochrome c oxidase subunit I (COI), the nuclear protein-coding gene recombination-activating protein 1 (RAG1), and the tyrosinase precursor (Tyr). The three species are immediately distinguishable from all other species of Bryophryne by the presence of a tympanic membrane and annulus, and by males having median subgular vocal sacs and emitting advertisement calls. Our molecular phylogeny confirms that the three species belong to a new, distinct clade, which we name Qosqophryne, and that they are reciprocally monophyletic with species of Microkayla. These two genera (Qosqophryne and Microkayla) are more closely related to species of Noblella and Psychrophrynella than to species of Bryophryne. Although there are no known morphological synapomorphies for either Microkayla or Qosqophryne, the high endemism of their species, and the disjoint geographic distribution of the two genera, with a gap region of ~310 km by airline where both genera are absent, provide further support for Qosqophryne having long diverged from Microkayla. The exploration of high elevation moss and leaf litter habitats in the tropical Andes will contribute to increase knowledge of the diversity and phylogenetic relationships within Terrarana. View Full-Text
Keywords: amphibian; Andes; Cusco; high elevation; Neotropical; Qosqophryne; tropical mountain; systematic; taxonomy amphibian; Andes; Cusco; high elevation; Neotropical; Qosqophryne; tropical mountain; systematic; taxonomy
►▼ Show Figures 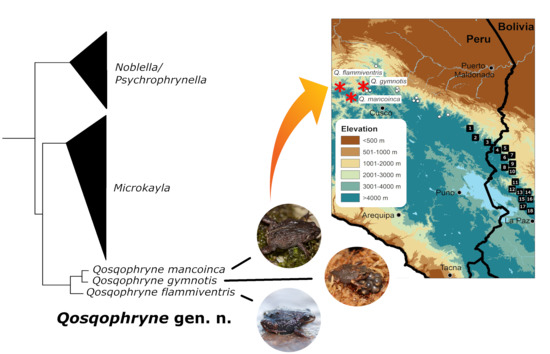