The First Fossil Owl (Aves, Strigiformes) From the Paleogene of Africa

Assessing the applicability of theory to major adaptive radiations in deep time represents an extremely difficult problem in evolutionary biology. Neoaves, which includes 95% of living birds, is believed to have undergone a period of rapid diversification roughly coincident with the Cretaceous–Paleogene (K-Pg) boundary. We investigate whether basal neoavian lineages experienced an ecological release in response to ecological opportunity, as evidenced by density compensation. We estimated effective population sizes (Ne) of basal neoavian lineages by combining coalescent branch lengths (CBLs) and the numbers of generations between successive divergences. We used a modified version of Accurate Species TRee Algorithm (ASTRAL) to estimate CBLs directly from insertion–deletion (indel) data, as well as from gene trees using DNA sequence and/or indel data. We found that some divergences near the K-Pg boundary involved unexpectedly high gene tree discordance relative to the estimated number of generations between speciation events. The simplest explanation for this result is an increase in Ne, despite the caveats discussed herein. It appears that at least some early neoavian lineages, similar to the ancestor of the clade comprising doves, mesites, and sandgrouse, experienced ecological release near the time of the K-Pg mass extinction. View Full-Text
Keywords: effective population size; Neoaves; adaptive radiation; ecological opportunity; ecological release; indels effective population size; Neoaves; adaptive radiation; ecological opportunity; ecological release; indels
►▼ Show Figures 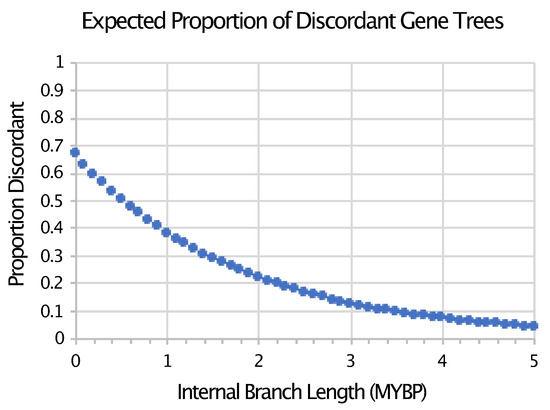