Artificial light at night is considered a major threat to biodiversity, especially for nocturnal species, as it reduces habitat availability, quality, and functionality. Since the recent evolution in light technologies in improving luminous efficacy, developed countries are experiencing a renewal of their lighting equipment that reaches its end-of-life, from conventional lighting technologies to light emitting diodes (LEDs). Despite potential cascading impacts of such a shift on nocturnal fauna, few studies have so far dealt with the impact of the renewal of street lighting by new technologies. Specifically, only one study, by Rowse et al.2016, examined the effects of switching from widely used low pressure sodium (LPS) lamps to LEDs, using bats as biological models. This study was based on a before-after-control-impact paired design (BACIP) at 12 pairs in the UK, each including one control and one experimental streetlight. If Rowse et al. 2016 showed no effect of switching to LEDs streetlights on bat activity, the effects of respective changes in light intensity and spectrum were not disentangled when testing switch effects. Here, we conduct a retrospective analysis of their data to include these covariates in statistical models with the aim of disentangling the relative effects of these light characteristics. Our re-analysis clearly indicates that the switches in spectrum and in intensity with replacement of LPS with LED lamps have significant additive and interactive effects, on bat activity. We also show that bat activity and buzz ratio decrease with increasing LED intensity while an opposite effect is observed with LPS lamps. Hence, the loss or the gain in bat activity when lamp types, i.e., spectrum, are switched strongly depends on the initial and new lamp intensities. Our results stress the need to consider simultaneously the effects of changes in the different lights characteristics when street lighting changes. Because switches from LPS to LED lamps can lead to an increase in light intensity, such technological changes may involve a reduction of bat activity in numerous cases, especially at high LED intensities. Since we are currently at an important crossroad in lighting management, we recommend to limit LED intensity and improve its spectral composition toward warmer colors to limit potential deleterious impacts on bat activity. View Full-Text
Keywords: artificial light at night; light pollution; bat activity; LED streetlight; Chiroptera artificial light at night; light pollution; bat activity; LED streetlight; Chiroptera
►▼ Show Figures 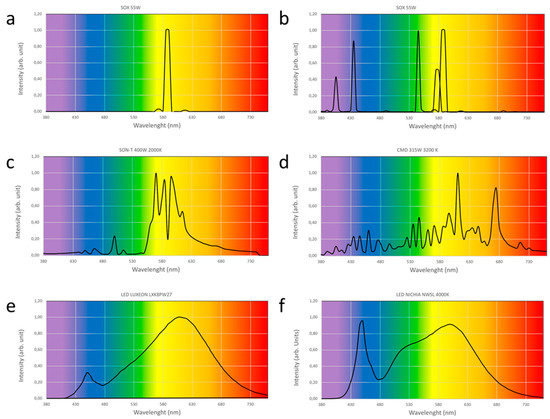