Ecology and Environmental Impact of Myriophyllum heterophyllum, an Aggressive Invader in European Waterways

Wine grape production is an important economic asset in many nations; however, a significant proportion of vines succumb to grapevine trunk pathogens, reducing yields and causing economic losses. Cover crops, plants that are grown in addition to main crops in order to maintain and enhance soil composition, may also serve as a line of defense against these fungal pathogens by producing volatile root exudates and/or harboring suppressive microbes. We tested whether cover crop diversity reduced disease symptoms and pathogen abundance. In two greenhouse experiments, we inoculated soil with a 106 conidia suspension of Ilyonectria liriodendri, a pathogenic fungus, then conditioned soil with cover crops for several months to investigate changes in pathogen abundance and fungal communities. After removal of cover crops, Chardonnay cuttings were grown in the same soil to assess disease symptoms. When grown alone, white mustard was the only cover crop associated with reductions in necrotic root damage and abundance of Ilyonectria. The suppressive effects of white mustard largely disappeared when paired with other cover crops. In this study, plant identity was more important than diversity when controlling for fungal pathogens in vineyards. This research aligns with other literature describing the suppressive potential of white mustard in vineyards. View Full-Text
Keywords: grapevine trunk disease; cover crops; biofumigant; young vine decline; plant-microbe interactions grapevine trunk disease; cover crops; biofumigant; young vine decline; plant-microbe interactions
►▼ Show Figures 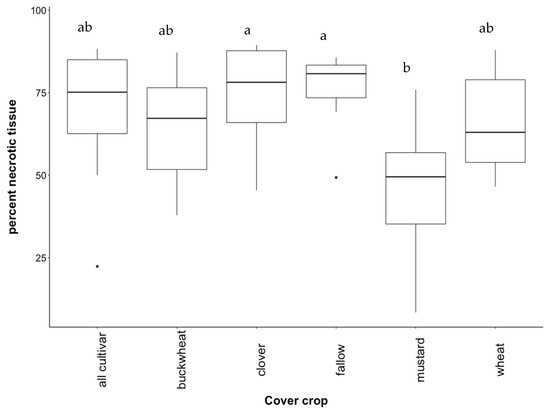