Evidence for Wide Dispersal in a Stem Galliform Clade from a New Small-Sized Middle Eocene Pangalliform (Aves: Paraortygidae) from the Uinta Basin of Utah (USA)
Previous Article in Journal

We describe a partial skeleton of a stem group penguin from the Waipara Greensand in New Zealand, which is tentatively assigned to Muriwaimanu tuatahi. The fossil includes the first complete wing of a Paleocene penguin and informs on previously unknown features of the mandible and tibiotarsus of small-sized Sphenisciformes from the Waipara Greensand. The wing is distinguished by important features from that of all geologically younger Sphenisciformes and documents an early stage in the evolution of wing-propelled diving in penguins. In particular, the wing of the new fossil exhibits a well-developed alular phalanx and the distal phalanges are not flattened. Because the wing phalanges resemble those of volant birds, we consider it likely that the wing feathers remained differentiated into functional categories and were not short and scale-like as they are in extant penguins. Even though the flippers of geologically younger penguins may favor survival in extremely cold climates, they are likely to have been shaped by hydrodynamic demands. Possible selective drivers include a diminished importance of the hindlimbs in subaquatic propulsion, new foraging strategies (the caudal end of the mandible of the new fossil distinctly differs from that of extant penguins), or increased predation by marine mammals. View Full-Text
Keywords: Aves; evolution; fossil birds; Muriwaimanu tuatahi; Sphenisciformes; wing-propelled diving Aves; evolution; fossil birds; Muriwaimanu tuatahi; Sphenisciformes; wing-propelled diving
►▼ Show Figures 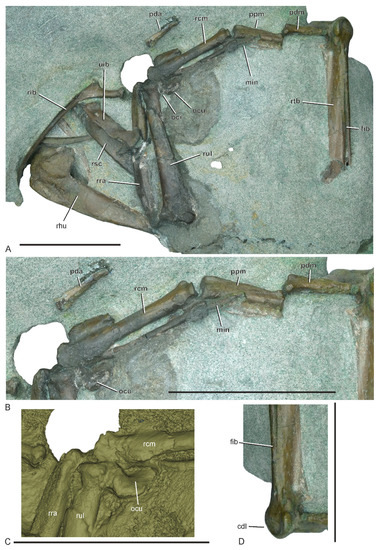