Geographical Range Extension of the Spotfin burrfish, Chilomycterus reticulatus (L. 1758), in the Canary Islands: A Response to Ocean Warming?

In recent decades, numerous marine species have changed their distribution ranges due to ocean warming. The Spotfin burrfish, Chilomycterus reticulatus, is a reef fish with a global distribution along tropical, subtropical and warm-temperate areas of the Pacific, Indian and Atlantic oceans. In this work, we analyzed the presence of this species, between 1990 and 2019, at two islands of the Canarian Archipelago under varying oceanographic conditions: El Hierro (the westernmost island, under more tropical conditions) and Gran Canaria (a central-east island, under more cooler conditions). We expected that, under increased ocean temperatures in recent decades, the number of sightings has increased in Gran Canaria relative to El Hierro. We compiled information from different sources, including interviews and local citizenship databases. A total of 534 sightings were reported: 38.58% from El Hierro and 61.43% from Gran Canaria. The number of sightings on Gran Canaria has significantly increased through time, at a rate of 0.1 sightings per year; at El Hierro, however, the number of sightings has not significantly changed over time. Sea Surface Temperature has linearly increased in both El Hierro and Gran Canaria islands over the last three decades. Positive Sea Surface Temperature anomalies, particularly in 1998 and 2010, including high winter minimum temperatures, provide an ideal oceanographic context to favour the arrival of new individuals and, consequently, the increase in the number of sightings in Gran Canaria. Still, potential donor areas of fish recruits remain unknown. View Full-Text
Keywords: tropicalization; sea temperature rise; distribution shift; population increase; Diodontidae; Canary Islands tropicalization; sea temperature rise; distribution shift; population increase; Diodontidae; Canary Islands
►▼ Show Figures 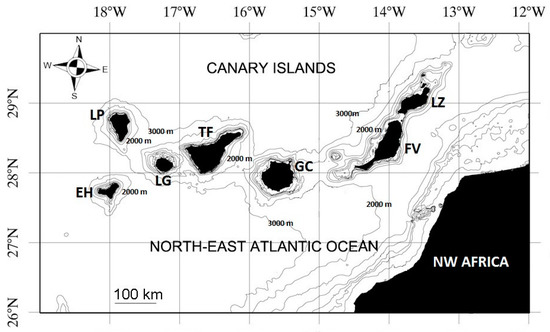