Geographical Range Extension of the Spotfin burrfish, Chilomycterus reticulatus (L. 1758), in the Canary Islands: A Response to Ocean Warming?
Next Article in Special Issue

In this study, we characterized genetic diversity in the gene bank for Dutch native cattle breeds. A total of 715 bulls from seven native breeds and a sample of 165 Holstein Friesian bulls were included. Genotype data were used to calculate genetic similarities. Based on these similarities, most breeds were clearly differentiated, except for two breeds (Deep Red and Improved Red and White) that have recently been derived from the MRY breed, and for the Dutch Friesian and Dutch Friesian Red, which have frequently exchanged bulls. Optimal contribution selection (OCS) was used to construct core sets of bulls with a minimized similarity. The composition of the gene bank appeared to be partly optimized in the semen collection process, i.e., the mean similarity within breeds based on the current number of straws per bull was 0.32% to 1.49% lower than when each bull would have contributed equally. Mean similarity could be further reduced within core sets by 0.34% to 2.79% using OCS. Material not needed for the core sets can be made available for supporting in situ populations and for research. Our findings provide insight in genetic diversity in Dutch cattle breeds and help to prioritize material in gene banking. View Full-Text
Keywords: conservation; cryobank; genetic variation; cattle conservation; cryobank; genetic variation; cattle
►▼ Show Figures 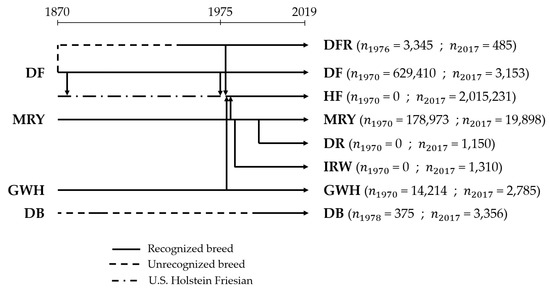