The small entimine genus Philetaerobius Marshall, 1923 is revised, entailing a redescription of the genus and the only hitherto described species, P. nidicola Marshall, as well as the description of three new species, P. endroedyi sp. n., P. garibebi sp. n. and P. louwi sp. n. A lectotype is designated for P. nidicola Marshall. The habitus and taxonomically important structures of all species are illustrated, including the previously unrecorded male and female genitalia. A key to the four species is provided, as well as a map of their known distributions in southern Namibia and the Northern and Western Cape provinces of South Africa. The habits of the genus, as known, are summarized, and its taxonomic position and indicated relationship with the taxonomically equally isolated genus Spartecerus are discussed. The habitus and genitalia of some Spartecerus species are also illustrated, and the available information on the life-history of the genus is summarized. View Full-Text
Keywords: taxonomy; South Africa; Namibia; weevils; new taxa; spermatheca; Mimaulus; Spartecerus taxonomy; South Africa; Namibia; weevils; new taxa; spermatheca; Mimaulus; Spartecerus
►▼ Show Figures 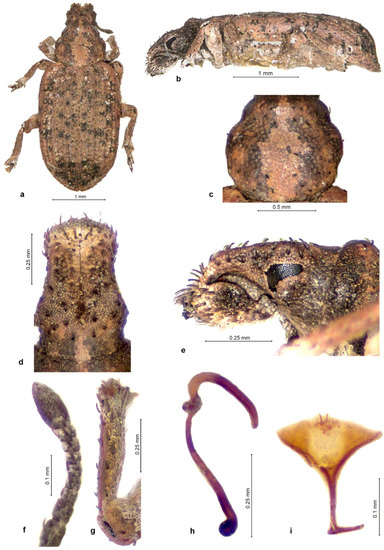