ERAP1 and ERAP2 Enzymes: A Protective Shield for RAS against COVID-19?
Next Article in Special Issue

Steroid hormones play a crucial role in supporting a successful pregnancy and ensuring proper fetal development. The placenta is one of the principal tissues in steroid production and metabolism, expressing a vast range of steroidogenic enzymes. Nevertheless, a comprehensive characterization of steroidogenic pathways in the human placenta and potential developmental changes occurring during gestation are poorly understood. Furthermore, the specific contribution of trophoblast cells in steroid release is largely unknown. Thus, this study aimed to (i) identify gestational age-dependent changes in the gene expression of key steroidogenic enzymes and (ii) explore the role of trophoblast cells in steroid biosynthesis and metabolism. Quantitative and Droplet Digital PCR analysis of 12 selected enzymes was carried out in the first trimester (n = 13) and term (n = 20) human placentas. Primary trophoblast cells (n = 5) isolated from human term placentas and choriocarcinoma-derived cell lines (BeWo, BeWo b30 clone, and JEG-3) were further screened for gene expression of enzymes involved in placental synthesis/metabolism of steroids. Finally, de novo steroid synthesis by primary human trophoblasts was evaluated, highlighting the functional activity of steroidogenic enzymes in these cells. Collectively, we provide insights into the expression patterns of steroidogenic enzymes as a function of gestational age and delineate the cellular origin of steroidogenesis in the human placenta. View Full-Text
Keywords: steroidogenesis; steroid metabolism; placenta; gestation; trophoblast steroidogenesis; steroid metabolism; placenta; gestation; trophoblast
►▼ Show Figures 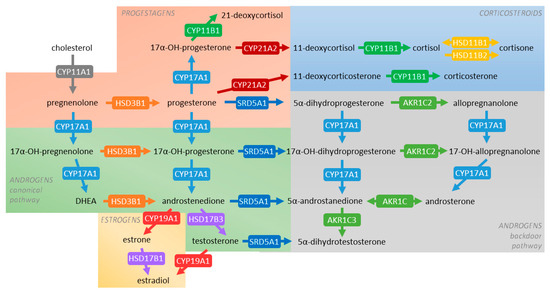