Bone tissue is continuously remodeled by the coordinated action of osteoclasts and osteoblasts. Nuclear factor-activated T cells c1 (NFATc1) is a well-known transcription factor for osteoclastogenesis and transcriptionally activated by the c-Fos and nuclear factor-kappa B (NF-κB) signaling pathways in response to receptor activation of NF-κB ligand (RANKL). Since excessive RANKL signaling causes an increase of osteoclast formation and bone resorption, inhibition of RANKL or its signaling pathway is an attractive therapeutic approach to the treatment of pathologic bone loss. In this study, we show that an ethyl acetate fraction (LEA) from the shiitake mushroom, Lentinula edodes, inhibited RANKL-induced osteoclast differentiation by blocking the NFATc1 signaling pathway. We found that the water extract and its subsequent ethyl acetate fraction of L. edodes significantly suppressed osteoclast formation. Comparative transcriptome analysis revealed that LEA specifically downregulated a set of RANKL target genes, including Nfatc1. Next, we found that LEA suppresses Nfatc1 expression mainly through the inhibition of the transactivity of p65 and NFATc1. Moreover, treatment of LEA rescued an osteoporotic phenotype in a zebrafish model of glucocorticoid-induced osteoporosis. Collectively, our findings define an undocumented role of the shiitake mushroom extract in regulating bone development. View Full-Text
Keywords: Lentinula edodes; osteoclast; NFATc1; osteoporosis Lentinula edodes; osteoclast; NFATc1; osteoporosis
►▼ Show Figures 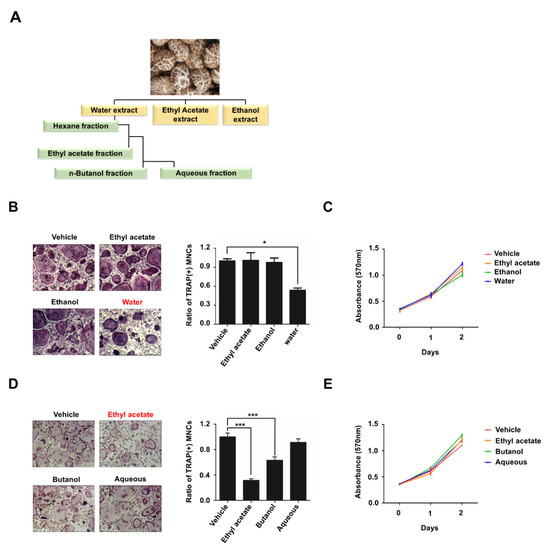