In mammals Homer1, Homer2 and Homer3 constitute a family of scaffolding proteins with key roles in Ca2+ signaling and Ca2+ transport. In rodents, Homer proteins and mRNAs have been shown to be expressed in various postnatal tissues and to be enriched in brain. However, whether the Homers are expressed in developing tissues is hitherto largely unknown. In this work, we used immunohistochemistry and in situ hybridization to analyze the expression patterns of Homer1, Homer2 and Homer3 in developing cephalic structures. Our study revealed that the three Homer proteins and their encoding genes are expressed in a wide range of developing tissues and organs, including the brain, tooth, eye, cochlea, salivary glands, olfactory and respiratory mucosae, bone and taste buds. We show that although overall the three Homers exhibit overlapping distribution patterns, the proteins localize at distinct subcellular domains in several cell types, that in both undifferentiated and differentiated cells Homer proteins are concentrated in puncta and that the vascular endothelium is enriched with Homer3 mRNA and protein. Our findings suggest that Homer proteins may have differential and overlapping functions and are expected to be of value for future research aiming at deciphering the roles of Homer proteins during embryonic development. View Full-Text
Keywords: ameloblasts; choroid plexus; cochlea; endothelium; hypothalamus; hippocampal formation; odontoblasts; olfactory epithelium; salivary glands; taste buds ameloblasts; choroid plexus; cochlea; endothelium; hypothalamus; hippocampal formation; odontoblasts; olfactory epithelium; salivary glands; taste buds
►▼ Show Figures 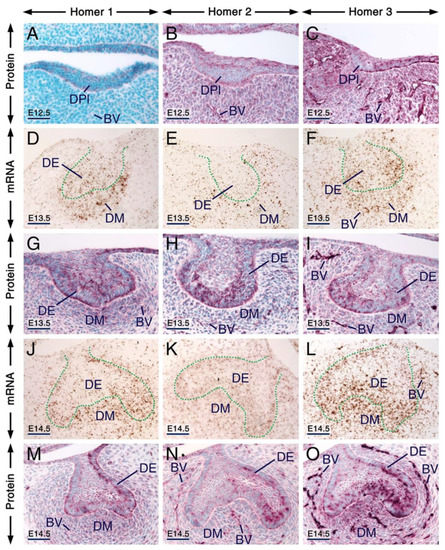