Cardiovascular Risk in Children: Focus on Pathophysiological Aspects
Next Article in Special Issue

Zebrafish embryos have been proposed as a cost-effective vertebrate model to study heart function. Many fluorescent genetically encoded Ca2+ indicators (GECIs) have been developed, but those with ratiometric readout seem more appropriate to image a moving organ such as the heart. Four ratiometric GECIs based on troponin C, TN-XXL, Twitch-1, Twitch-2B, and Twitch-4 were expressed transiently in the heart of zebrafish embryos. Their emission ratio reported the Ca2+ levels in both the atrium and the ventricle. We measured several kinetic parameters of the Ca2+ transients: systolic and diastolic ratio, the amplitude of the systolic Ca2+ rise, the heart rate, as well as the rise and decay times and slopes. The systolic ratio change decreased in cells expressing high biosensor concentration, possibly caused by Ca2+ buffering. The GECIs were able to report the effect of nifedipine and propranolol on the heart, which resulted in changes in heart rate, diastolic and systolic Ca2+ levels, and Ca2+ kinetics. As a result, Twitch-1 and Twitch-4 (Kd 0.25 and 2.8 µM, respectively) seem the most promising GECIs for generating transgenic zebrafish lines, which could be used for modeling heart disorders, for drug screening, and for cardiotoxicity assessment during drug development. View Full-Text
Keywords: calcium; genetically encoded calcium indicator (GECI); biosensor; zebrafish; embryo; heart; imaging calcium; genetically encoded calcium indicator (GECI); biosensor; zebrafish; embryo; heart; imaging
►▼ Show Figures 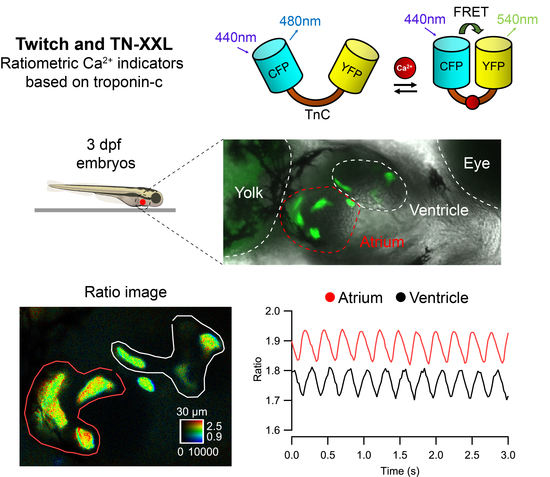