Insights on the Interplay between Cells Metabolism and Signaling: A Therapeutic Perspective in Pediatric Acute Leukemias
Next Article in Special Issue

The acetylation or deacetylation of polysaccharides can influence their physical properties and biological activities. One main constituent of the edible medicinal orchid, Dendrobium officinale, is water-soluble polysaccharides (WSPs) with substituted O-acetyl groups. Both O-acetyl groups and WSPs show a similar trend in different organs, but the genes coding for enzymes that transfer acetyl groups to WSPs have not been identified. In this study, we report that REDUCED WALL ACETYLATION (RWA) proteins may act as acetyltransferases. Three DoRWA genes were identified, cloned, and sequenced. They were sensitive to abscisic acid (ABA), but there were no differences in germination rate and root length between wild type and 35S::DoRWA3 transgenic lines under ABA stress. Three DoRWA proteins were localized in the endoplasmic reticulum. DoRWA3 had relatively stronger transcript levels in organs where acetyl groups accumulated than DoRWA1 and DoRWA2, was co-expressed with polysaccharides synthetic genes, so it was considered as a candidate acetyltransferase gene. The level of acetylation of polysaccharides increased significantly in the seeds, leaves and stems of three 35S::DoRWA3 transgenic lines compared to wild type plants. These results indicate that DoRWA3 can transfer acetyl groups to polysaccharides and is a candidate protein to improve the biological activity of other edible and medicinal plants. View Full-Text
Keywords: acetyl groups; Dendrobium officinale; REDUCED WALL ACETYLATION; endoplasmic reticulum acetyl groups; Dendrobium officinale; REDUCED WALL ACETYLATION; endoplasmic reticulum
►▼ Show Figures 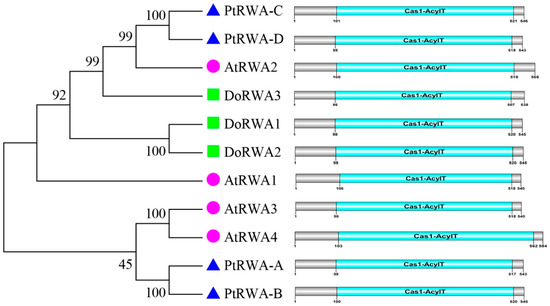