The Role of Maresins in Inflammatory Pain: Function of Macrophages in Wound Regeneration
Previous Article in Journal

Recently, nanosecond pulsed electric field (nsPEF) has been considered as a new tool for tumor therapy, but its molecular mechanism of function remains to be fully elucidated. Here, we explored the cellular processes of Jurkat cells exposed to nanosecond pulsed electric field. Differentially expressed genes (DEGs) were acquired from the GEO2R, followed by analysis with a series of bioinformatics tools. Subsequently, 3D protein models of hub genes were modeled by Modeller 9.21 and Rosetta 3.9. Then, a 100 ns molecular dynamics simulation for each hub protein was performed with GROMACS 2018.2. Finally, three kinds of nsPEF voltages (0.01, 0.05, and 0.5 mV/mm) were used to simulate the molecular dynamics of hub proteins for 100 ns. A total of 1769 DEGs and eight hub genes were obtained. Molecular dynamic analysis, including root mean square deviation (RMSD), root mean square fluctuation (RMSF), and the Rg, demonstrated that the 3D structure of hub proteins was built, and the structural characteristics of hub proteins under different nsPEFs were acquired. In conclusion, we explored the effect of nsPEF on Jurkat cell signaling pathway from the perspective of molecular informatics, which will be helpful in understanding the complex effects of nsPEF on acute T-cell leukemia Jurkat cells. View Full-Text
Keywords: nanosecond pulsed electric field (nsPEF); Jurkat; microarray; bioinformatics analysis; molecular dynamics simulation nanosecond pulsed electric field (nsPEF); Jurkat; microarray; bioinformatics analysis; molecular dynamics simulation
►▼ Show Figures 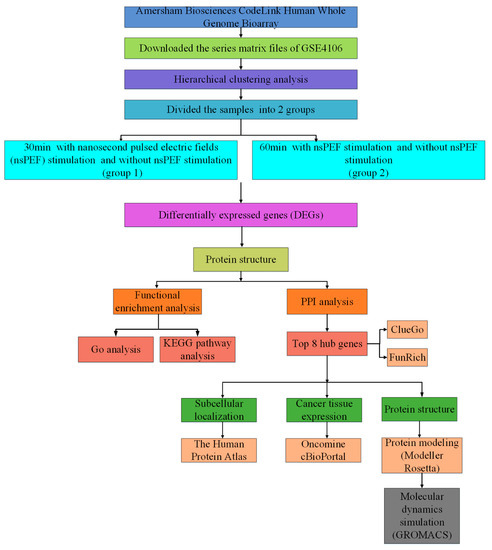