The Gas-Phase Formation Mechanism of Dibenzofuran (DBF), Dibenzothiophene (DBT), and Carbazole (CA) from Benzofuran (BF), Benzothiophene (BT), and Indole (IN) with Cyclopentadienyl Radical
Next Article in Special Issue

Long non-coding RNAs (lncRNAs) play important roles in plant growth and stress responses. As a dominant abiotic stress factor in soil, boron (B) deficiency stress has impacted the growth and development of citrus in the red soil region of southern China. In the present work, we performed a genome-wide identification and characterization of lncRNAs in response to B deficiency stress in the leaves of trifoliate orange (Poncirus trifoliata), an important rootstock of citrus. A total of 2101 unique lncRNAs and 24,534 mRNAs were predicted. Quantitative real-time polymerase chain reaction (qRT-PCR) experiments were performed for a total of 16 random mRNAs and lncRNAs to validate their existence and expression patterns. Expression profiling of the leaves of trifoliate orange under B deficiency stress identified 729 up-regulated and 721 down-regulated lncRNAs, and 8419 up-regulated and 8395 down-regulated mRNAs. Further analysis showed that a total of 84 differentially expressed lncRNAs (DELs) were up-regulated and 31 were down-regulated, where the number of up-regulated DELs was 2.71-fold that of down-regulated. A similar trend was also observed in differentially expressed mRNAs (DEMs, 4.21-fold). Functional annotation of these DEMs was performed using Gene Ontology (GO) and the Kyoto Encyclopedia of Genes and Genomes (KEGG) pathway analyses, and the results demonstrated an enrichment of the categories of the biosynthesis of secondary metabolites (including phenylpropanoid biosynthesis/lignin biosynthesis), plant hormone signal transduction and the calcium signaling pathway. LncRNA target gene enrichment identified several target genes that were involved in plant hormones, and the expression of lncRNAs and their target genes was significantly influenced. Therefore, our results suggest that lncRNAs can regulate the metabolism and signal transduction of plant hormones, which play an important role in the responses of citrus plants to B deficiency stress. Co-expression network analysis indicated that 468 significantly differentially expressed genes may be potential targets of 90 lncRNAs, and a total of 838 matched lncRNA-mRNA pairs were identified. In summary, our data provides a rich resource of candidate lncRNAs and mRNAs, as well as their related pathways, thereby improving our understanding of the role of lncRNAs in response to B deficiency stress, and in symptom formation caused by B deficiency in the leaves of trifoliate orange. View Full-Text
Keywords: Citrus; boron deficiency; long non-coding RNAs; co-expression; plant hormone Citrus; boron deficiency; long non-coding RNAs; co-expression; plant hormone
►▼ Show Figures 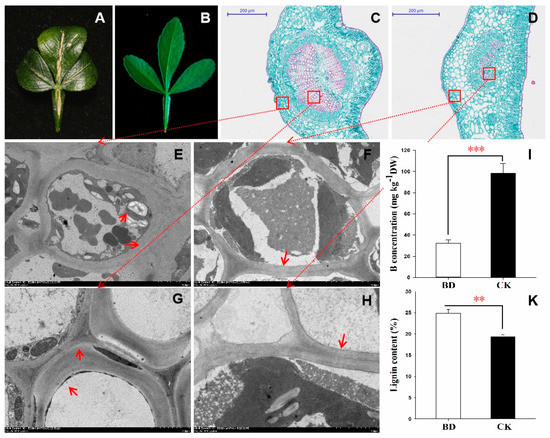