Biosynthesis of Metal Nanoparticles via Microbial Enzymes: A Mechanistic Approach

To elucidate the light-dependent gene expression in Cerrena unicolor FCL139, the transcriptomes of the fungus growing in white, blue, green, and red lighting conditions and darkness were analysed. Among 10,413 all-unigenes detected in C. unicolor, 7762 were found to be expressed in all tested conditions. Transcripts encoding putative fungal photoreceptors in the C. unicolor transcriptome were identified. The number of transcripts uniquely produced by fungus ranged from 20 during its growth in darkness to 112 in the green lighting conditions. We identified numerous genes whose expression differed substantially between the darkness (control) and each of the light variants tested, with the greatest number of differentially expressed genes (DEGs) (454 up- and 457 down-regulated) observed for the white lighting conditions. The DEGs comprised those involved in primary carbohydrate metabolism, amino acid metabolism, autophagy, nucleotide repair systems, signalling pathways, and carotenoid metabolism as defined using Kyoto Encyclopedia of Genes and Genomes (KEGG) database. The analysis of the expression profile of genes coding for lignocellulose-degrading enzymes suggests that the wood-degradation properties of C. unicolor may be independent of the lighting conditions and may result from the overall stimulation of fungal metabolism by daylight. View Full-Text
Keywords: Cerrena unicolor; white rot fungi; light; transcriptome; RNA-seq Cerrena unicolor; white rot fungi; light; transcriptome; RNA-seq
►▼ Show Figures 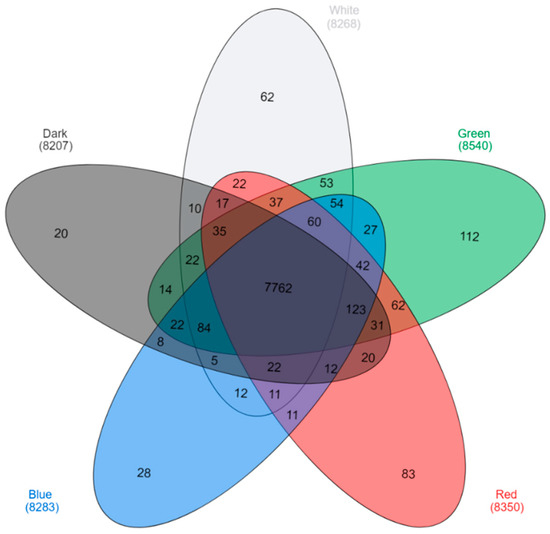