Paraoxonase-1 as a Regulator of Glucose and Lipid Homeostasis: Impact on the Onset and Progression of Metabolic Disorders

Metabolic disorders are characterized by an overall state of inflammation and oxidative stress, which highlight the importance of a functional antioxidant system and normal activity of some endogenous enzymes, namely paraoxonase-1 (PON1). PON1 is an antioxidant and anti-inflammatory glycoprotein from the paraoxonases family. It is mainly expressed in the liver and secreted to the bloodstream, where it binds to HDL. Although it was first discovered due to its ability to hydrolyze paraoxon, it is now known to have an antiatherogenic role. Recent studies have shown that PON1 plays a protective role in other diseases that are associated with inflammation and oxidative stress, such as Type 1 and Type 2 Diabetes Mellitus and Non-Alcoholic Fatty Liver Disease. The aim of this review is to elucidate the physiological role of PON1, as well as the impact of altered PON1 levels in metabolic disorders. View Full-Text
Keywords: PON1; glucose; insulin resistance; diabetes mellitus; NAFLD; obesity PON1; glucose; insulin resistance; diabetes mellitus; NAFLD; obesity
►▼ Show Figures 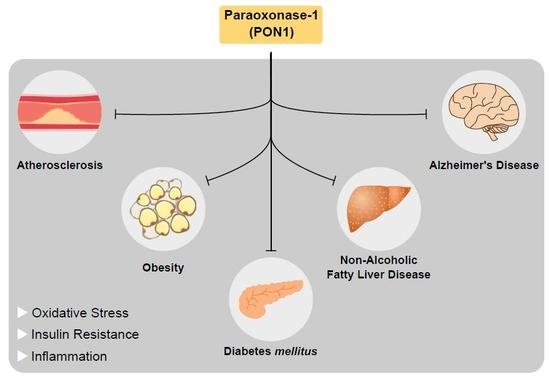 
Meneses MJ, Silvestre R, Sousa-Lima I, Macedo MP. Paraoxonase-1 as a Regulator of Glucose and Lipid Homeostasis: Impact on the Onset and Progression of Metabolic Disorders. International Journal of Molecular Sciences. 2019; 20(16):4049.