SSRIs and SNRIs (SRI) in Pregnancy: Effects on the Course of Pregnancy and the Offspring: How Far Are We from Having All the Answers?

Effect of the 5-HT2C Receptor Agonist WAY-163909 on Serotonin and Dopamine Metabolism across the Rat Brain: A Quantitative and Qualitative Neurochemical Study

The effects triggered by serotonin2C (5-hydroxytryptamin2C, 5-HT2C) receptor agonists in the brain are often subtle, and methodologies highlighting their widespread actions to account for their multiple modulatory influences on behaviors are still lacking. We report an extended analysis of a neurochemical database on monoamines obtained after the intraperitoneal administration of the preferential 5-HT2C receptor agonist WAY-163909 (0.3 and 3 mg/kg) in 29 distinct rat brain regions. We focused on the metabolite of 5-HT, 5-hydroxyindoleacetic acid (5-HIAA), the metabolites of dopamine (DA), 3,4-dihydroxyphenylacetic acid (DOPAC) and homovanillic acid (HVA), and the index of the turnovers 5-HIAA/5-HT and DOPAC/DA. WAY-163909 increased and decreased 5-HIAA tissue levels in the amygdala and dorsolateral orbitofrontal cortex, respectively, and decreased the 5-HT turnover in the infralimbic cortex. It enhanced HVA levels in the medial orbitofrontal cortex and DOPAC levels in the amygdala. WAY-163909 increased and decreased DA turnover in the medial orbitofrontal cortex and the anterior insular cortex, respectively. The correlative analysis of the turnovers between pairs of brain regions revealed low levels of correlations across the brain but presented a distinct pattern of correlations after WAY-163909 was compared to saline-treated rats. WAY-163909, notably at 0.3 mg/kg, favored cortico-cortical and cortico-subcortical correlations of both turnovers separately, and frontal DOPAC/DA ratio with cortical and subcortical 5-HIAA/5-HT ratios at 3 mg/kg. In conclusion, the qualitative, but not the quantitative analysis shows that WAY-163909 alters the pattern of correlations across the brain, which could account for its multiple behavioral influences. View Full-Text
Keywords: metabolism; dopamine; serotonin; 5-HIAA; HPLC; HVA; DOPAC; correlative analysis; 5-HT2C receptor; connectivity metabolism; dopamine; serotonin; 5-HIAA; HPLC; HVA; DOPAC; correlative analysis; 5-HT2C receptor; connectivity
►▼ Show Figures 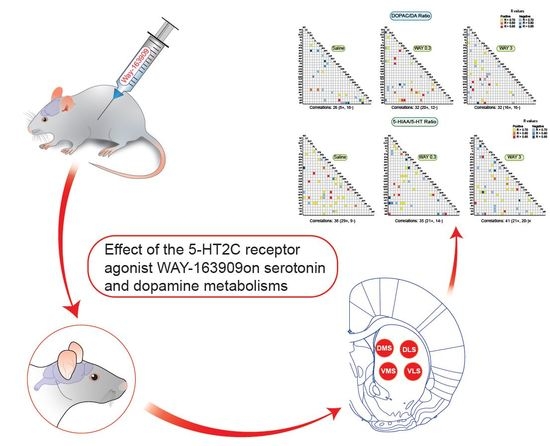