The Therapeutic Strategy of HDAC6 Inhibitors in Lymphoproliferative Disease

Cell differentiation into cardiomyocytes requires activation of differentiation-specific genes and epigenetic factors that contribute to these physiological processes. This study is focused on the in vitro differentiation of mouse embryonic stem cells (mESCs) induced into cardiomyocytes. The effects of clinically promising inhibitors of histone deacetylases (HDACi) on mESC cardiomyogenesis and on explanted embryonic hearts were also analyzed. HDAC1 depletion caused early beating of cardiomyocytes compared with those of the wild-type (wt) counterpart. Moreover, the adherence of embryonic bodies (EBs) was reduced in HDAC1 double knockout (dn) mESCs. The most important finding was differentiation-specific H4 deacetylation observed during cardiomyocyte differentiation of wt mESCs, while H4 deacetylation was weakened in HDAC1-depleted cells induced to the cardiac pathway. Analysis of the effect of HDACi showed that Trichostatin A (TSA) is a strong hyperacetylating agent, especially in wt mESCs, but only SAHA reduced the size of the beating areas in EBs that originated from HDAC1 dn mESCs. Additionally, explanted embryonic hearts (e15) responded to treatment with HDACi: all of the tested HDACi (TSA, SAHA, VPA) increased the levels of H3K9ac, H4ac, H4K20ac, and pan-acetylated lysines in embryonic hearts. This observation shows that explanted tissue can be maintained in a hyperacetylation state several hours after excision, which appears to be useful information from the view of transplantation strategy and the maintenance of gene upregulation via acetylation in tissue intended for transplantation. View Full-Text
Keywords: cardiomyocytes; histones H3 and H4; embryonic stem cells; epigenetics; HDAC1 cardiomyocytes; histones H3 and H4; embryonic stem cells; epigenetics; HDAC1
►▼ Show Figures 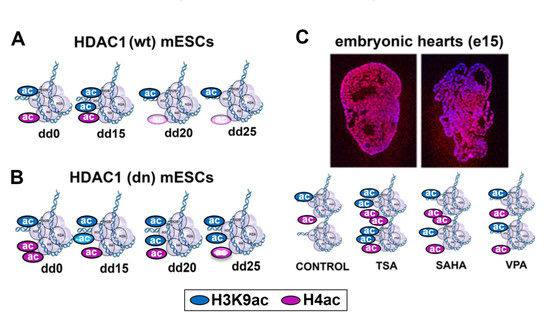