The Role of Peroxisome Proliferator-Activated Receptors and Their Transcriptional Coactivators Gene Variations in Human Trainability: A Systematic Review
Previous Article in Journal

To assess the interrelation between the change of metabolites and the change of fruit color, we performed a combined metabolome and transcriptome analysis of the flesh in two different Actinidia arguta cultivars: “HB” (“Hongbaoshixing”) and “YF” (“Yongfengyihao”) at two different fruit developmental stages: 70d (days after full bloom) and 100d (days after full bloom). Metabolite and transcript profiling was obtained by ultra-performance liquid chromatography quadrupole time-of-flight tandem mass spectrometer and high-throughput RNA sequencing, respectively. The identification and quantification results of metabolites showed that a total of 28,837 metabolites had been obtained, of which 13,715 were annotated. In comparison of HB100 vs. HB70, 41 metabolites were identified as being flavonoids, 7 of which, with significant difference, were identified as bracteatin, luteolin, dihydromyricetin, cyanidin, pelargonidin, delphinidin and (−)-epigallocatechin. Association analysis between metabolome and transcriptome revealed that there were two metabolic pathways presenting significant differences during fruit development, one of which was flavonoid biosynthesis, in which 14 structural genes were selected to conduct expression analysis, as well as 5 transcription factor genes obtained by transcriptome analysis. RT-qPCR results and cluster analysis revealed that AaF3H, AaLDOX, AaUFGT, AaMYB, AabHLH, and AaHB2 showed the best possibility of being candidate genes. A regulatory network of flavonoid biosynthesis was established to illustrate differentially expressed candidate genes involved in accumulation of metabolites with significant differences, inducing red coloring during fruit development. Such a regulatory network linking genes and flavonoids revealed a system involved in the pigmentation of all-red-fleshed and all-green-fleshed A. arguta, suggesting this conjunct analysis approach is not only useful in understanding the relationship between genotype and phenotype, but is also a powerful tool for providing more valuable information for breeding. View Full-Text
Keywords: candidate genes; metabolites; flavonoid biosynthesis; fruit coloring; Actinidia arguta candidate genes; metabolites; flavonoid biosynthesis; fruit coloring; Actinidia arguta
►▼ Show Figures 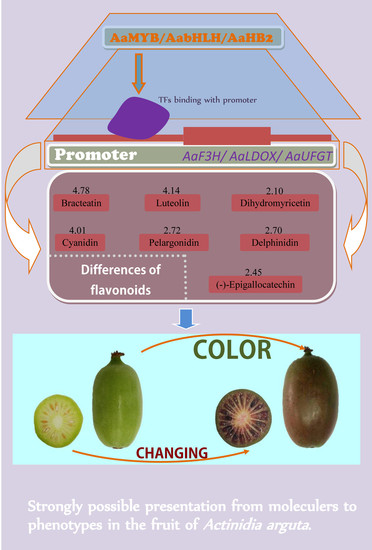