Melanins in Fossil Animals: Is It Possible to Infer Life History Traits from the Coloration of Extinct Species?

Phyllostachys nigra var. henosis, a domestic bamboo species, has been attracting much attention; its bioactive compounds (especially in the leaf) show antioxidant, anti-inflammatory, and anti-obesity activities. Little information is available on the antioxidative and anti-melanogenetic activities of the bioactive compounds in bamboo stems. The anti-melanogenic and antioxidative activities of the EtOAc fraction (PN3) of a P. nigra stem extract were investigated in a cell-free system and in B16F10 melanoma cells. PN3 consisted of a mixture of flavonoids, such as catechin, chlorogenic acid, caffeic acid, and p-coumaric acid. The antioxidant activity (2,2-diphenyl-1-picrylhydrazyl (DPPH), 2,2′-azino-bis(3-ethylbenzothiazoline-6-sulfonic acid (ABTS)), and hydroxyl radical scavenging) was evaluated, as well as the inhibition of reactive oxygen species (ROS) produced by the Fenton reaction. PN3 showed in vitro tyrosinase inhibition activity with the half maximal inbihitory concentration (IC50) values of 240 μg/mL, and in vivo cytotoxic concentration ranges > 100 μg/mL. The protein expression levels and mRNA transcription levels of TYR, TRP-1, and MITF were decreased in a dose-dependent manner by the treatment with PN3. PN3 interfered with the phosphorylation of intracellular protein kinase A (PKA)/cAMP response element-binding protein (CREB), demonstrating potent anti-melanogenic effects. PN3 could inhibit PKA/CREB and the subsequent degradation of microphthalmia-associated transcription factor (MITF), resulting in the suppression of melanogenic enzymes and melanin production, probably because of the presence of flavonoid compounds. These properties make it a candidate as an additive to whitening cosmetics. View Full-Text
Keywords: bamboo stem; Phyllostachys nigra var. henosis; anti-melanogenesis; antioxidation; B16F10 melanoma cells; whitening cosmetics bamboo stem; Phyllostachys nigra var. henosis; anti-melanogenesis; antioxidation; B16F10 melanoma cells; whitening cosmetics
►▼ Show Figures 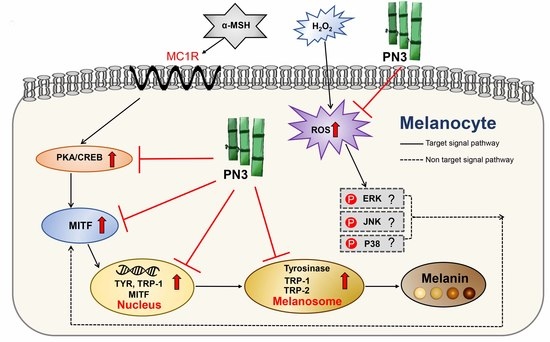