Oxidative Stress as Cause, Consequence, or Biomarker of Altered Female Reproduction and Development in the Space Environment
Next Article in Special Issue

Mutations in the GLA Gene and LysoGb3: Is It Really Anderson-Fabry Disease?
Previous Article in Special Issue

Relationship of Circulating Irisin with Body Composition, Physical Activity, and Cardiovascular and Metabolic Disorders in the Pediatric Population

Exercise-induced irisin, a recently discovered myokine, has been linked to insulin resistance, obesity, and other diseases in adults; however, information in children is scarce and contradictory. We analyzed the limited evidence of irisin’s effects in children and adolescents, and its association with body composition, exercise training, cardiovascular risk factors, and metabolic diseases, as well as the results of dietetic interventions. Both positive and negative correlations between irisin concentrations and body mass index, fat mass, fat-free mass, and other anthropometric parameters were found. Likewise, contradictory evidence was shown associating irisin plasma levels with cardiovascular and metabolic parameters such as glucose, insulin resistance, and cholesterol and other lipid and fatty acid plasma levels in healthy children, as well as in those with obesity and the metabolic syndrome. Gender, puberty, and hormonal differences were also examined. Furthermore, important contradictory findings according to the type and duration of exercise and of dietetic interventions in healthy and unhealthy subjects were demonstrated. In addition, correlations between mother–infant relations and circulating irisin were also identified. This review discusses the potential role of irisin in health and disease in the pediatric population. View Full-Text
Keywords: irisin; pediatric; children; cardiovascular disease; nutrition; diet; body composition; metabolic syndrome; obesity, neonates irisin; pediatric; children; cardiovascular disease; nutrition; diet; body composition; metabolic syndrome; obesity, neonates
►▼ Show Figures 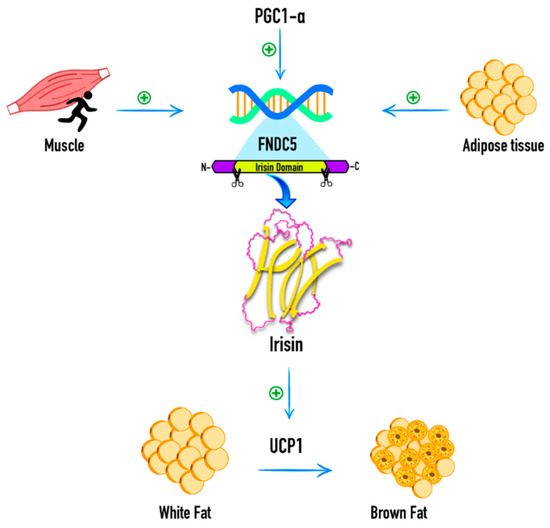