Dental stem cells (DSCs) have emerged as a promising tool for basic research and clinical practice. A variety of adult stem cell (ASC) populations can be isolated from different areas within the dental tissue, which, due to their cellular and molecular characteristics, could give rise to different outcomes when used in potential applications. In this study, we performed a high-throughput molecular comparison of two primary human adult dental stem cell (hADSC) sub-populations: Stem Cells from Human Exfoliated Deciduous Teeth (SHEDs) and Periodontal Ligament Stem Cells (PDLSCs). A detailed proteomic mapping of SHEDs and PDLSCs, via employment of nano-LC tandem-mass spectrometry (MS/MS) revealed 2032 identified proteins in SHEDs and 3235 in PDLSCs. In total, 1516 proteins were expressed in both populations, while 517 were unique for SHEDs and 1721 were exclusively expressed in PDLSCs. Further analysis of the recorded proteins suggested that SHEDs predominantly expressed molecules that are involved in organizing the cytoskeletal network, cellular migration and adhesion, whereas PDLSCs are highly energy-producing cells, vastly expressing proteins that are implicated in various aspects of cell metabolism and proliferation. Applying the Rho-GDI signaling pathway as a paradigm, we propose potential biomarkers for SHEDs and for PDLSCs, reflecting their unique features, properties and engaged molecular pathways. View Full-Text
Keywords: dental stem cells; PDLSC; SHED; proteomics; cellular functions; molecular pathways dental stem cells; PDLSC; SHED; proteomics; cellular functions; molecular pathways
►▼ Show Figures 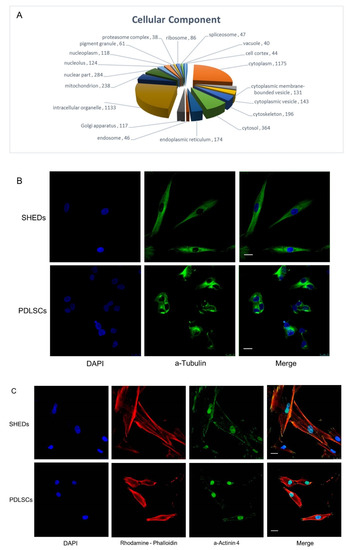