Protein/Arabinoxylans Gels: Effect of Mass Ratio on the Rheological, Microstructural and Diffusional Characteristics

Wheat bran arabinoxylan (WBAX) gels entrapping standard model proteins at different mass ratios were formed. The entrapment of protein affected the gel elasticity and viscosity values, which decreased from 177 to 138 Pa. The presence of protein did not modify the covalent cross-links content of the gel. The distribution of protein through the network was investigated by confocal laser scanning microscopy. In mixed gels, protein aggregates forming clusters were detected at protein/polysaccharide ratios higher than 0.25. These clusters were not homogeneously distributed, suggesting that WBAX and protein are located in two different phases. The apparent diffusion coefficient (Dm) of proteins during release from mixed gels was investigated for mass ratios of 0.06 and 0.12. For insulin, Dm increased significantly from 2.64 × 10−7 to 3.20 × 10−7 cm2/s as the mass ratio augmented from 0.06 to 0.12. No significant difference was found for Dm values of ovalbumin and bovine serum albumin released from the mixed gels. The results indicate that homogeneous protein/WBAX gels can be formed at low mass ratios, allowing the estimation of Dm by using an analytical solution of the second Fick’s law. View Full-Text
Keywords: arabinoxylan; ferulic acid; protein; phase separation; controlled release arabinoxylan; ferulic acid; protein; phase separation; controlled release
►▼ Show Figures 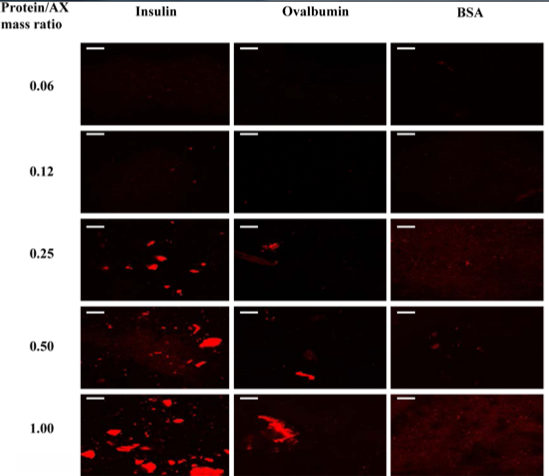