A Rapid Nano-Liquid Chromatographic Method for the Analysis of Cannabinoids in Cannabis sativa L. Extracts

Cannabis sativa L. is an herbaceous plant belonging to the family of Cannabaceae. It is classified into three different chemotypes based on the different cannabinoids profile. In particular, fiber-type cannabis (hemp) is rich in cannabidiol (CBD) content. In the present work, a rapid nano liquid chromatographic method (nano-LC) was proposed for the determination of the main cannabinoids in Cannabis sativa L. (hemp) inflorescences belonging to different varieties. The nano-LC experiments were carried out in a 100 µm internal diameter capillary column packed with a C18 stationary phase for 15 cm with a mobile phase composed of ACN/H2O/formic acid, 80/19/1% (v/v/v). The reverse-phase nano-LC method allowed the complete separation of four standard cannabinoids in less than 12 min under isocratic elution mode. The nano-LC method coupled to ultraviolet (UV) detection was validated and applied to the quantification of the target analytes in cannabis extracts. The nano-LC system was also coupled to an electrospray ionization–mass spectrometry (ESI-MS) detector to confirm the identity of the cannabinoids present in hemp samples. For the extraction of the cannabinoids, three different approaches, including dynamic maceration (DM), ultrasound-assisted extraction (UAE), and an extraction procedure adapted from the French Pharmacopeia’s protocol on medicinal plants, were carried out, and the results achieved were compared. View Full-Text
Keywords: cannabinoids; Cannabis sativa L.; hemp inflorescences extracts; nano-LC-UV; nano-LC–MS cannabinoids; Cannabis sativa L.; hemp inflorescences extracts; nano-LC-UV; nano-LC–MS
►▼ Show Figures 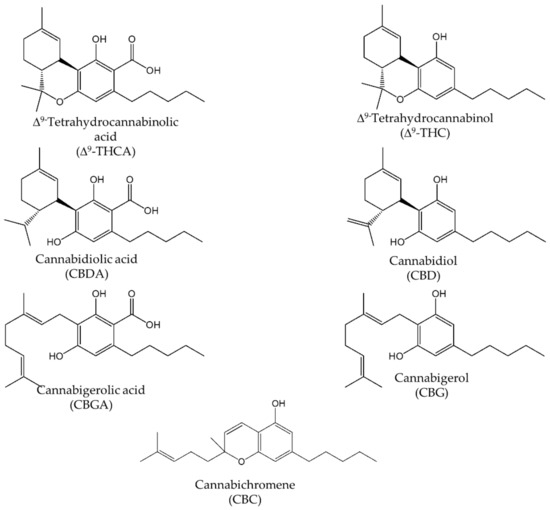