Inhalation Administration of the Bicyclic Ethers 1,8- and 1,4-cineole Prevent Anxiety and Depressive-Like Behaviours in Mice

The anxiolytic and antidepressant-like activities of the naturally occurring monoterpene 1,8-cineole and its structural isomer 1,4-cineole were evaluated in mice via inhalation administration at doses ranging from 4 × 10−6 to 4 × 10−1 mg per 400 μL of triethyl citrate. Mice were tested for anxiety-like behaviours by using the light–dark box test (LDB) and marble-burying test (MBT) and for depression-like symptoms by using the forced swimming test (FST) and tail suspension test (TST). Diazepam and fluoxetine were used as standard drugs for anxiolytic and antidepressant tests, respectively. The results showed that 1,8-cineole at 4 × 10−4 mg, and 1,4-cineole at 4 × 10−4 and 4 × 10−3 mg significantly increased the amount of time spent in the light box and the number of entries in the light box in the LDB as well as reduced the number of marbles buried in the MBT relative to those in the control, suggesting an anxiolytic effect. Similarly, 1,8-cineole at 4 × 10−4 and 4 × 10−2 mg and 1,4-cineole at doses of 4 × 10−4 to 4 × 10−2 mg significantly reduced immobility times in the FST and TST relative to those of the control, suggesting an antidepressant activity. The role of the GABAA/benzodiazepine receptor system in the anxiolytic effects of 1,8- and 1,4-cineole was investigated through co-administration of flumazenil, a GABAergic system antagonist. Flumazenil reversed the effects of diazepam and 1,8-cineole, suggesting that 1,8-cineole affects the GABAA/benzodiazepine receptors. Collectively, the results suggest that inhaled 1,8- and 1,4-cineole prevented anxiety and depressive-like symptoms in classic mice models. View Full-Text
Keywords: cineole; anxiety; depression; light-dark box test; marble-burying test; forced swimming test; tail suspension test cineole; anxiety; depression; light-dark box test; marble-burying test; forced swimming test; tail suspension test
►▼ Show Figures 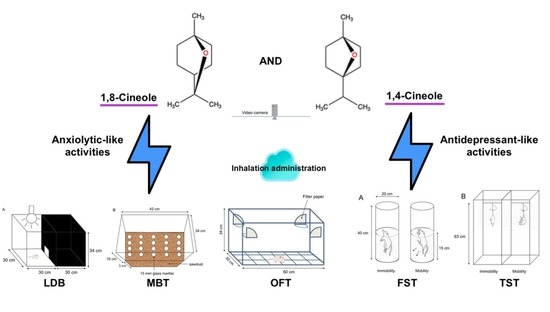