Effect of Copper on the Mitochondrial Carnitine/Acylcarnitine Carrier Via Interaction with Cys136 and Cys155. Possible Implications in Pathophysiology

The effect of copper on the mitochondrial carnitine/acylcarnitine carrier (CAC) was studied. Transport function was assayed as [3H]carnitine/carnitine antiport in proteoliposomes reconstituted with the native protein extracted from rat liver mitochondria or with the recombinant CAC over-expressed in E. coli. Cu2+ (as well as Cu+) strongly inhibited the native transporter. The inhibition was reversed by GSH (reduced glutathione) or by DTE (dithioerythritol). Dose-response analysis of the inhibition of the native protein was performed from which an IC50 of 1.6 µM for Cu2+ was derived. The mechanism of inhibition was studied by using the recombinant WT or Cys site-directed mutants of CAC. From the dose-response curve of the effect of Cu2+ on the recombinant protein, an IC50 of 0.28 µM was derived. Inhibition kinetics revealed a non-competitive type of inhibition by Cu2+. However, a substrate protection experiment indicated that the interaction of Cu2+ with the protein occurred in the vicinity of the substrate-binding site. Dose-response analysis on Cys mutants led to much higher IC50 values for the mutants C136S or C155S. The highest value was obtained for the C136/155S double mutant, indicating the involvement of both Cys residues in the interaction with Cu2+. Computational analysis performed on the WT CAC and on Cys mutants showed a pattern of the binding energy mostly overlapping the binding affinity derived from the dose-response analysis. All the data concur with bridging of Cu2+ with the two Cys residues, which blocks the conformational changes required for transport cycle. View Full-Text
Keywords: carnitine; copper; membrane transport; toxicology; computational chemistry carnitine; copper; membrane transport; toxicology; computational chemistry
►▼ Show Figures 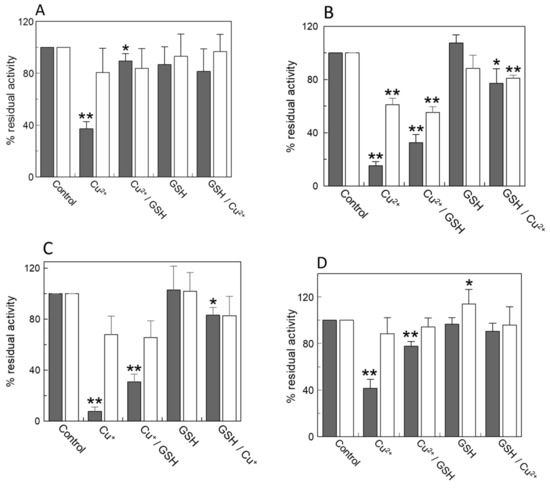