Sorption of Organic Pollutants by Humic Acids: A Review
Previous Article in Journal

The Pharmaceutical Industry in 2019. An Analysis of FDA Drug Approvals from the Perspective of Molecules
Previous Article in Special Issue

A Novel Dimeric Exoglucanase (GH5_38): Biochemical and Structural Characterisation towards its Application in Alkyl Cellobioside Synthesis

An exoglucanase (Exg-D) from the glycoside hydrolase family 5 subfamily 38 (GH5_38) was heterologously expressed and structurally and biochemically characterised at a molecular level for its application in alkyl glycoside synthesis. The purified Exg-D existed in both dimeric and monomeric forms in solution, which showed highest activity on mixed-linked β-glucan (88.0 and 86.7 U/mg protein, respectively) and lichenin (24.5 and 23.7 U/mg protein, respectively). They displayed a broad optimum pH range from 5.5 to 7 and a temperature optimum from 40 to 60 °C. Kinetic studies demonstrated that Exg-D had a higher affinity towards β-glucan, with a Km of 7.9 mg/mL and a kcat of 117.2 s−1, compared to lichenin which had a Km of 21.5 mg/mL and a kcat of 70.0 s−1. The circular dichroism profile of Exg-D showed that its secondary structure consisted of 11% α-helices, 36% β-strands and 53% coils. Exg-D performed transglycosylation using p-nitrophenyl cellobioside as a glycosyl donor and several primary alcohols as acceptors to produce methyl-, ethyl- and propyl-cellobiosides. These products were identified and quantified via thin-layer chromatography (TLC) and liquid chromatography–mass spectrometry (LC-MS). We concluded that Exg-D is a novel and promising oligomeric glycoside hydrolase for the one-step synthesis of alkyl glycosides with more than one monosaccharide unit. View Full-Text
Keywords: Alkyl cellobiosides; dimeric protein; exoglucanase; GH5_38; transglycosylation Alkyl cellobiosides; dimeric protein; exoglucanase; GH5_38; transglycosylation
►▼ Show Figures 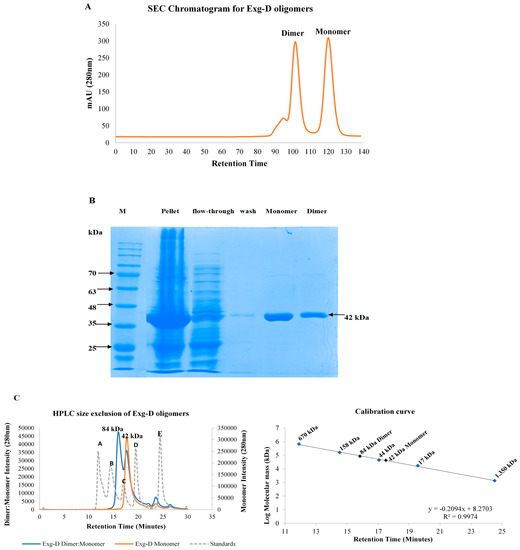