The discovery of potent natural and ecofriendly pesticides is one of the focuses of the agrochemical industry, and plant species are a source of many potentially active compounds. We describe the bioassay-guided isolation of antifungal and phytotoxic compounds from the ethyl acetate extract of Ambrosia salsola twigs and leaves. With this methodology, we isolated and identified twelve compounds (four chalcones, six flavonols and two pseudoguaianolide sesquiterpene lactones). Three new chalcones were elucidated as (S)-β-Hydroxy-2′,3,4,6′-tetrahydroxy-5-methoxydihydrochalcone (salsolol A), (S)-β-Hydroxy-2′,4,4′,6′-tetrahydroxy-3-methoxydihydrochalcone (salsolol B), and (R)-α, (R)-β-Dihydroxy-2′,3,4,4′,6′-pentahydroxydihydrochalcone (salsolol C) together with nine known compounds: balanochalcone, six quercetin derivatives, confertin, and neoambrosin. Chemical structures were determined based on comprehensive direct analysis in real time-high resolution mass spectrometry (HR-DART-MS), as well as 1D and 2D NMR experiments: Cosy Double Quantum Filter (DQFCOSY), Heteronuclear Multiple Quantum Coherence (HMQC) and Heteronuclear Multiple Bond Coherence (HMBC), and the absolute configurations of the chalcones were confirmed by CD spectra analysis. Crystal structure of confertin was determined by X-ray diffraction. The phytotoxicity of purified compounds was evaluated, and neoambrosim was active against Agrostis stolonifera at 1 mM, while confertin was active against both, Lactuca sativa and A. stolonifera at 1 mM and 100 µM, respectively. Confertin and salsolol A and B had IC50 values of 261, 275, and 251 µM, respectively, against Lemna pausicotata (duckweed). The antifungal activity was also tested against Colletotrichum fragariae Brooks using a thin layer chromatography bioautography assay. Both confertin and neoambrosin were antifungal at 100 µM, with a higher confertin activity than that of neoambrosin at this concentration. View Full-Text
Keywords: Ambrosia salsola; Ambrosia dumosa; β-Hydroxydihydrochalcones; fungitoxic and phytotoxic compounds; confertin; X-ray diffraction Ambrosia salsola; Ambrosia dumosa; β-Hydroxydihydrochalcones; fungitoxic and phytotoxic compounds; confertin; X-ray diffraction
►▼ Show Figures 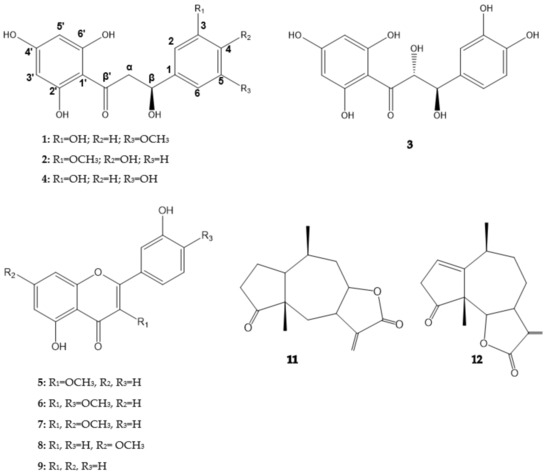