The Indianmeal moth, Plodia interpunctella, is one of the most damaging pests of stored products. We investigated the insecticidal properties of ApKTI, a Kunitz trypsin inhibitor from Adenanthera pavonina seeds, against P. interpunctella larvae through bioassays with artificial diet. ApKTI-fed larvae showed reduction of up to 88% on larval weight and 75% in survival. Trypsin enzymes extracted from P. interpunctella larvae were inhibited by ApKTI, which also demonstrated capacity to bind to chitin. Kinetic studies revealed a non-competitive inhibition mechanism of ApKTI for trypsin, which were further corroborated by molecular docking studies. Furthermore, we have demonstrated that ApKTI exhibits a hydrophobic pocket near the reactive site loop probably involved in chitin interactions. Taken together, these data suggested that the insecticidal activity of ApKTI for P. interpunctella larvae involves a dual and promiscuous mechanisms biding to two completely different targets. Both processes might impair the P. interpunctella larval digestive process, leading to larvae death before reaching the pupal stage. Further studies are encouraged using ApKTI as a biotechnological tool to control insect pests in field conditions. View Full-Text
Keywords: non-competitive inhibitor; trypsin inhibitor; peritrophic membrane non-competitive inhibitor; trypsin inhibitor; peritrophic membrane
►▼ Show Figures 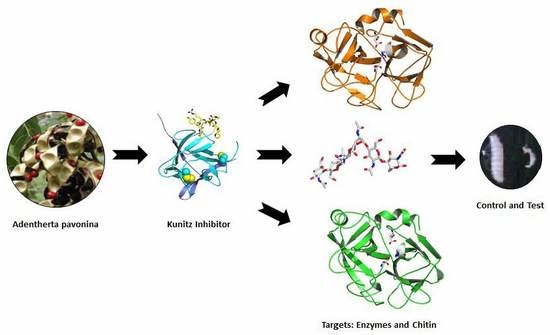