Epithelial-to-mesenchymal transition (EMT) is increasingly recognized as contributing to the pathogenesis of idiopathic pulmonary fibrosis. Therefore, novel plant-based natural, active compounds have been sought for the treatment of fibrotic EMT. The aim of the present study was to investigate the inhibitory effects of Astilbe rubra on TGF-β1-induced EMT in lung alveolar epithelial cells (A549). A. rubra was subjected to extraction using 70% ethanol (ARE), and ethanol extracts of the aerial part and that of the rhizome were further partitioned using various solvents. Protein expression and cell motility were investigated to evaluate the inhibitory effects of ARE on EMT. EMT occurred in A549 cells treated with TGF-β1, but was prevented by co-treatment with ARE. The dichloromethane fractions showed the strongest inhibitory effect on TGF-β1-induced EMT. β-Peltoboykinolic acid was isolated from the dichloromethane fractions of A. rubra by activity-oriented isolation. β-Peltoboykinolic acid not only attenuated TGF-β1-induced EMT, but also the overproduction of extracellular matrix components including type I collagen and fibronectin. The Smad pathway activated by TGF-β1 was inhibited by co-treatment with β-peltoboykinolic acid. Taken together, these results indicate that β-peltoboykinolic acid from A. rubra and dichloromethane fractions shows potential as an antifibrotic agent in A549 cells treated with TGF-β1. View Full-Text
Keywords: Astilbe rubra; β-peltoboykinolic acid; epithelial-mesenchymal transition; TGF-β1; lung fibrosis Astilbe rubra; β-peltoboykinolic acid; epithelial-mesenchymal transition; TGF-β1; lung fibrosis
►▼ Show Figures 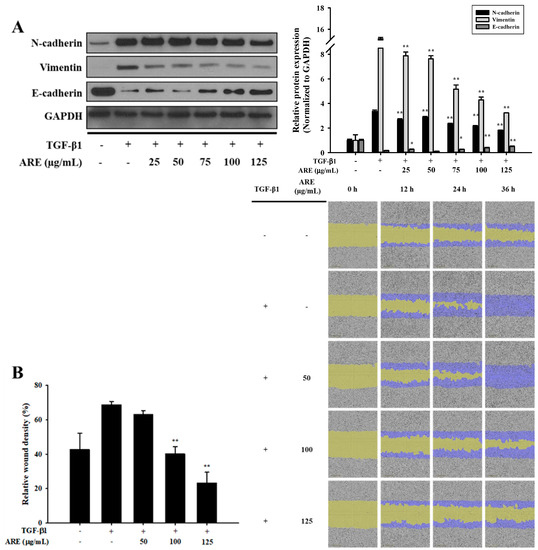