This study aims at investigating p-menthane, a novel bio-based solvent resulting from the hydrogenation of d-limonene, as a green alternative to n-hexane or toluene for the extraction and solubilization of natural substances. First, conductor-like combination of quantum chemistry (COSMO) coupled with statistical thermodynamics (RS) calculations show a comparable solubilization profile of p-menthane and n-hexane for carotene, volatile monoterpenes such as carvone and limonene, and model triglycerides. Other data obtained experimentally in solid/liquid extraction conditions further indicate that p-menthane showed similar performances to n-hexane for extracting carotenes from carrots, aromas from caraway seeds, and oils from rapeseeds, as these products showed a comparable composition. p-Menthane was also tested using common analytical extraction procedures such as Soxhlet for determination of oil content via multiple extraction stages, and Dean–Stark for determination of water content via azeotropic distillation. For both systems, yields were comparable, but for Dean–Stark, the distillation curve slope was higher when using p-menthane, and the time needed to attain 100% water recovery was 55% shorter than for toluene. Taken together, these results reveal the potential of p-menthane as a green replacer for petroleum-based solvents such as n-hexane or toluene. View Full-Text
Keywords: p-menthane; Citrus by-products; hydrogenation; green solvent; extraction; Soxhlet; Dean–Stark p-menthane; Citrus by-products; hydrogenation; green solvent; extraction; Soxhlet; Dean–Stark
►▼ Show Figures 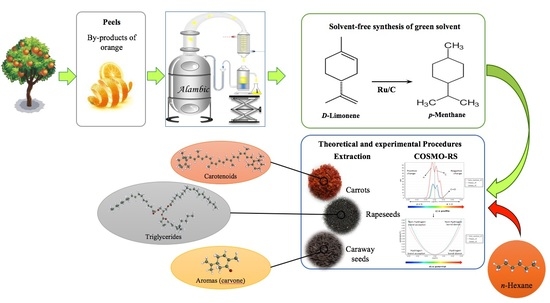