Silymarin/Silybin and Chronic Liver Disease: A Marriage of Many Years
Previous Article in Journal

Silymarin is the most commonly used herbal medicine by patients with chronic liver disease. Silymarin flavonolignans undergo rapid first-pass metabolism primarily by glucuronidation. The aims of this investigation were: (1) to determine the association of UGT1A1*28 polymorphism with the area under the plasma concentration-time curves (AUCs) for silybin A (SA) and silybin B (SB); (2) to evaluate the effect of UGT1A1*28 polymorphism on the profile of flavonolignan glucuronide conjugates found in the plasma; and (3) to investigate the role of UGT1A1 enzyme kinetics on the pharmacokinetics of SA and SB. AUCs and metabolic ratios for thirty-three patients with chronic liver disease administered oral doses of silymarin were compared between different UGT1A1*28 genotypes. The AUCs, metabolic ratios, and the profiles of major SA and SB glucuronides did not differ significantly among the three UGT1A1 genotypes. In contrast, an increase in the proportion of sulfated flavonolignan conjugates in plasma was observed in subjects with UGT1A1*28/*28 genotype compared to subjects carrying wild type alleles. Differences in SA and SB in vitro intrinsic clearance estimates for UGTIA1 correlated inversely with SA and SB exposures observed in vivo indicating a major role for UGT1A1 in silymarin metabolism. In addition, a significant difference in the metabolic ratio observed between patients with NAFLD and HCV suggests that any effect of UGT1A1 polymorphism may be obscured by a greater effect of liver disease on the pharmacokinetics of silymarin. Taken together, these results suggest the presence of the UGT1A1*28 allele does not contribute significantly to a large inter-subject variability in the pharmacokinetics of silybin A and silybin B which may obscure the ability to detect beneficial effects of silymarin in patients with liver disease. View Full-Text
Keywords: UGT1A1; polymorphism; pharmacokinetics; silymarin; silybin A; liver disease; NAFLD; HCV UGT1A1; polymorphism; pharmacokinetics; silymarin; silybin A; liver disease; NAFLD; HCV
►▼ Show Figures 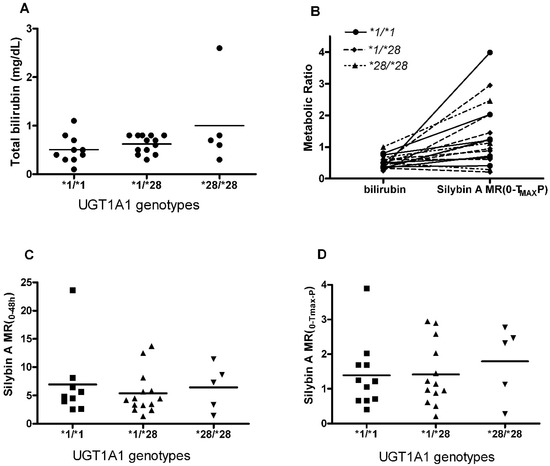 
Xie Y, Miranda SR, Hoskins JM, Hawke RL. Role of UDP-Glucuronosyltransferase 1A1 in the Metabolism and Pharmacokinetics of Silymarin Flavonolignans in Patients with HCV and NAFLD. Molecules. 2017; 22(1):142. https://doi.org/10.3390/molecules22010142