Over the past two decades, influenza A viruses have been of increasing concern to veterinary and human public health. From their wild waterfowl reservoir, influenza A viruses can sporadically spread to infect other species including domestic poultry and mammals. The majority of these sporadic transmission events are self-limiting but occasionally result in the formation of stable viral lineages that are capable of sustained transmission within the new host. While influenza A viruses that infect humans, poultry and pigs have been extensively studied, less is known about the viruses that infect horses, dogs, cats, mink and marine mammals. The transmission pathways, barriers to interspecies transmission and viral adaptations that are associated with establishing a stable lineage in a new host are complex and only beginning to be understood. The genetic plasticity responsible for the evolution of novel viruses capable of efficiently replicating and spreading within a new host is a function of the error prone nature of the viral polymerase complex and gene segment reassortment.  Although a number of viral signatures associated with high pathogenicity for domestic poultry and mammalian tropism have been identified, we are still far from accurately predicting the genetic or protein configurations that hallmark a zoonotic virus.

The emergence of the A/Goose/Guangdong/1/1996 (H5N1) lineage completely changed our view of the potential origins of the next human pandemic virus. In February 1997, eighteen human cases of H5N1 that resulted in six deaths were reported in Hong Kong. Outbreaks in commercial chicken farms and live bird markets that involved this virus led to the territory-wide slaughter of more than 1.5 million chickens by December 1997. During the following six years limited outbreaks of H5N1 in birds but no human cases were reported in Hong Kong and China. The virus re-emerged in February 2003 and between 2003 and 2005 poultry outbreaks and human cases occurred in China and multiple countries in Southeast Asia.  As of August 18, 2017, two decades after the first reported cases in people, a total of 859 laboratory-confirmed human cases that include 450 deaths in 16 countries have been associated with viruses belonging to this lineage. Fortunately, all cases have been the result of self-limiting sporadic transmission events involving high risk contacts with infected poultry and no sustained human-to-human transmission.  The concern over H5N1 as a potential pandemic virus was eclipsed by the emergence of a second poultry-origin virus in China in 2013. As of August 7, 2017, five epidemic waves of poultry-to-human H7N9 infections have resulted in a total of 1557 laboratory-confirmed cases and 573 deaths. Notwithstanding the legitimate concern that these two avian-origin viruses have generated, it was a swine-origin virus that suddenly emerged in 2009 that resulted in the first influenza pandemic of the 21st century, illustrating not only gaps in surveillance but in our inability to predict where the next pandemic virus will come from.

This Topical Collection of Veterinary Sciences will explore the multifaceted interfaces associated with interspecies influenza A virus transmission and its implications for veterinary and human public health. Topics to be addressed include but are not limited to: Virus biology within natural (waterfowl reservoir) versus artificial (industrial agriculture) ecosystems, surveillance requirements, practices and behaviors that enable inter-species transmission, the role of biosecurity, the evolution of low pathogenic to highly pathogenic avian influenza virus in domestic poultry, the “mixing vessel” paradigm and “outlier scenarios”, zoonotic strain prediction, animal-to-human and human-to-animal transmission, and pandemic strain evolutionary pathways.

Submitted manuscripts should not have been published previously, nor be under consideration for publication elsewhere (except conference proceedings papers). All manuscripts are thoroughly refereed through a single-blind peer-review process. A guide for authors and other relevant information for submission of manuscripts is available on the Instructions for Authors page. Veterinary Sciences is an international peer-reviewed open access monthly journal published by MDPI.

Please visit the Instructions for Authors page before submitting a manuscript. The Article Processing Charge (APC) for publication in this open access journal is 1700 CHF (Swiss Francs). Submitted papers should be well formatted and use good English. Authors may use MDPI's English editing service prior to publication or during author revisions.

Elizabeth A. Pusch
and

Open AccessReview
Novel Flu Viruses in Bats and Cattle: “Pushing the Envelope” of Influenza Infection
by 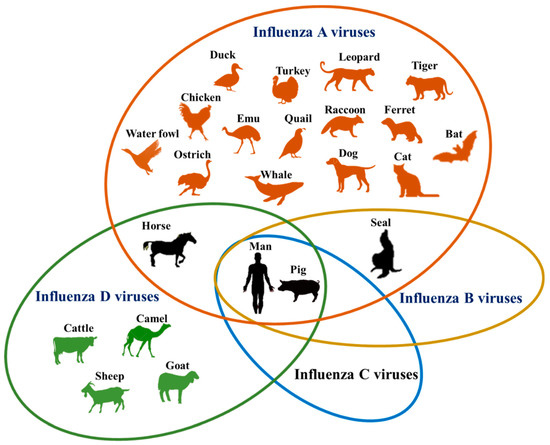 Open AccessArticle
Impact of RNA Degradation on Viral Diagnosis: An Understated but Essential Step for the Successful Establishment of a Diagnosis Network
by