Dogs (Canis familiaris) as Sentinels for Human Infectious Disease and Application to Canadian Populations: A Systematic Review
Next Article in Special Issue

Brucella spp. at the Wildlife-Livestock Interface: An Evolutionary Trajectory through a Livestock-to-Wildlife “Host Jump”?
Previous Article in Special Issue

Poultry-adapted H9N2 avian influenza viruses (AIVs) are commonly found in many countries in Asia, the Middle East, Africa, and Europe, and although classified as low pathogenic viruses, they are an economically important disease. Besides the importance of the disease in the poultry industry, some H9N2 AIVs are also known to be zoonotic. The disease in humans appears to cause primarily a mild upper respiratory disease, and doesn’t cause or only rarely causes the severe pneumonia often seen with other zoonotic AIVs like H5N1 or H7N9. Serologic studies in humans, particularly in occupationally exposed workers, show a large number of people with antibodies to H9N2, suggesting infection is commonly occurring. Of the four defined H9N2 poultry lineages, only two lineages, the G1 and the Y280 lineages, are associated with human infections. Almost all of the viruses from humans have a leucine at position 226 (H3 numbering) of the hemagglutinin associated with a higher affinity of binding with α2,6 sialic acid, the host cell receptor most commonly found on glycoproteins in the human upper respiratory tract. For unknown reasons there has also been a shift in recent years of poultry viruses in the G1 and Y280 lineages to also having leucine instead of glutamine, the amino acid found in most avian viruses, at position 226. The G1 and Y280 poultry lineages because of their known ability to infect humans, the high prevalence of the virus in poultry in endemic countries, the lack of antibody in most humans, and the shift of poultry viruses to more human-like receptor binding makes these viruses a human pandemic threat. Increased efforts for control of the virus, including through effective vaccine use in poultry, is warranted for both poultry and public health goals. View Full-Text
Keywords: H9N2; avian influenza; zoonotic; human infection H9N2; avian influenza; zoonotic; human infection
►▼ Show Figures 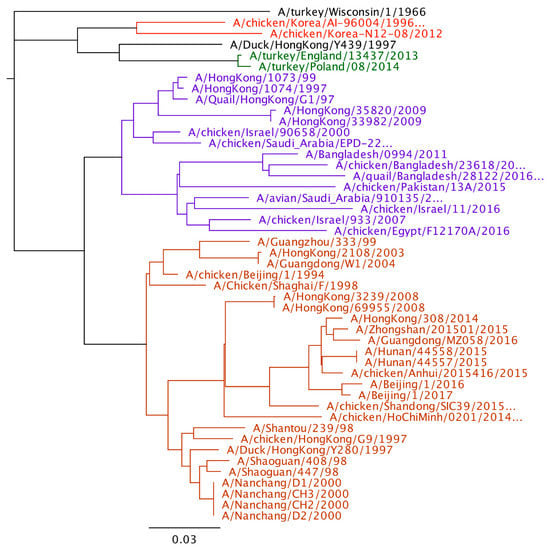