Impact of Recycled Water Irrigation on Soil Salinity and Its Remediation

Digital mapping was applied for a key site located at the Southern Cis-Ural region near Ufa city (the Republic of Bashkortostan, Russia). The digital soil map (DSM) was created using the open-source GIS software packages and compared to a conventional (CSM) one. As input parameters, we used standard morphometric values of the topography and field descriptions of soils, including the authors’ data. The DSM was created at the same scale (1:25,000) as the CSM, and soils of different classes were grouped according to the principle of genetic homogeneity and regional agroecological value. Comparing DSM and CSM showed several significant differences in the position, areas, and boundaries of hydromorphic soils and chernozems. The DSM has advantages over CSM at estimating smaller soil areas (areals) and their boundaries, in particular, on elevated topography elements (hills and steep slopes) and upper links of the erosion network (small dry valleys, hollows, and gullies). On the other hand, fluvial soils are mapped rather poorly by the digital approach, and CSM is more appropriate for such soils’ areals. The highest discrepancy is confined to the areas of eroded soils and fluvisols (15% and 12% of total area, respectively) due to significant differences in DSM and CSM approaches for such soil groups. We suppose that the digital method is effective and suitable for the Cis-Ural region, despite 57% soil taxa (types) prediction accuracy and the complexity of the territory by its ruggedness, erosion, and suffusion processes. The implementation and further use of digital mapping methods increase the quality of work, reduce its cost and terms in the region. View Full-Text
Keywords: soil; digital elevation model; mapping; soil-landscape relations; sustainable agriculture soil; digital elevation model; mapping; soil-landscape relations; sustainable agriculture
►▼ Show Figures 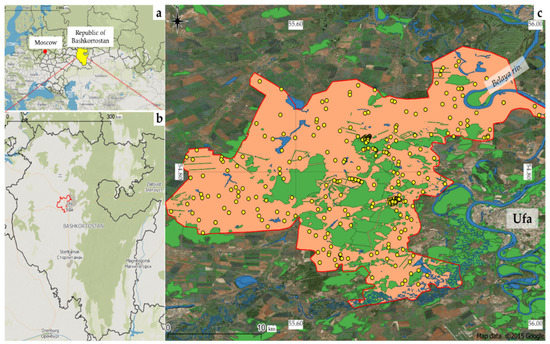