The Combined Impact of CLIR Post-Analytical Tools and Second Tier Testing on the Performance of Newborn Screening for Disorders of Propionate, Methionine, and Cobalamin Metabolism

Newborn Screening for Cystic Fibrosis in Russia: A Catalyst for Improved Care

In order to assess the effectiveness of the detection of cystic fibrosis (CF) patients by screening compared with diagnoses based on clinical manifestations, the data of the National CF Patient Registry (NCFPR) from the year 2012 (group I: children aged 6–9 years, diagnosed prior to the start of screening) were compared with the data in the NCFPR from the year 2015 (group II: children 6–9 years after the start of screening) for CF patients from the Moscow region. Homozygotes for c.1521_1523delCTT (F508del) were separately compared in both groups. The average diagnosis age, genotype, body mass index, spirometry data, pulmonary infection, medications, and presence of complications were analyzed. This study demonstrated that in the c.1521_1523delCTT (F508del) homozygote group, the patients diagnosed by screening had significant advantages over the patients born before the start of newborn screening in the diagnosis age, the number of patients with chronic Pseudomonas aeruginosa infection, the pulmonary function, and the growth in the percentiles. Newborn screening (NBS) detects nearly twice as many CF patients as the diagnostics based on clinical symptoms during the same time period. Importantly, patients will benefit from the early diagnosis of the disease and the early start of therapy. View Full-Text
Keywords: cystic fibrosis; newborn screening; IRT; sweat test cystic fibrosis; newborn screening; IRT; sweat test
►▼ Show Figures 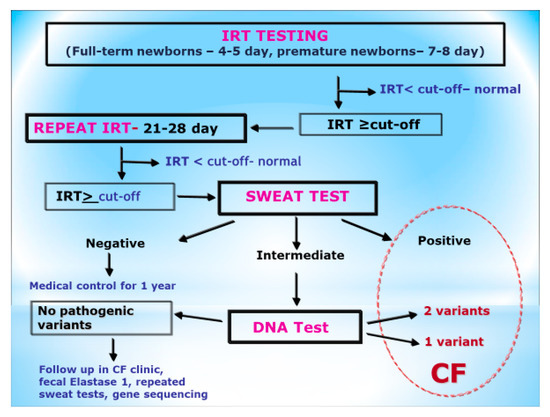