The Coats of Arms and Other Forms of State Emblem Proposed for the Republic of Macedonia, and the Process of Their Adoption, 1992–2014
Previous Article in Journal

The Rise and Fall of BritainsDNA: A Tale of Misleading Claims, Media Manipulation and Threats to Academic Freedom
Previous Article in Special Issue

The Shields that Guard the Realms of Men: Heraldry in Game of Thrones

The vast popularity of the Game of Thrones franchise has drawn a new and diverse audience to the fantasy genre. Within the pseudo-medieval world created by G.R.R. Martin, a great deal of detail has gone into establishing coats of arms for the characters and families that are depicted. These arms fulfill an extremely important role, both within the arc of the story and as part of the marketing collateral of this very successful series. This article examines the role of arms in the Game of Thrones universe and explores how the heraldic system transcends the usual genealogical display and functions more as a type of familial branding. An exploration of some of the practices and idiosyncrasies of heraldry in the franchise shows that whilst Martin sets his foundation firmly in the traditional, he then extends this into the fanciful; in much the same manner as he does with other faux-historical aspects of his work. This study is valuable because Game of Thrones has brought heraldry from being a niche interest to something that is now consumed by a global audience of hundreds of millions of people. Several of the fantasy blazons in the series are now arguably the most recognisable coats of arms in history. View Full-Text
Keywords: Game of Thrones; A Song of Ice and Fire; heraldry; blazonry; fantasy; G.R.R. Martin Game of Thrones; A Song of Ice and Fire; heraldry; blazonry; fantasy; G.R.R. Martin
►▼ Show Figures 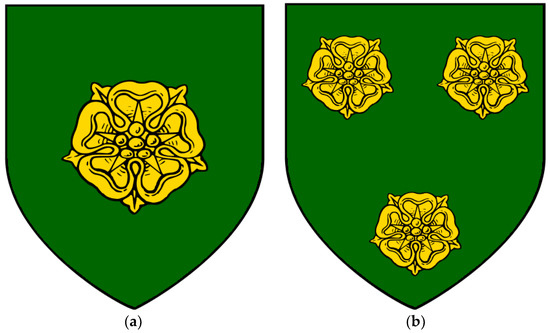