We have investigated by means of optical microscopy and magnetic measurements the first-order thermal spin transition of the [{Fe(NCSe)(py)2}2(m-bpypz)] spin-crossover compound under various shining intensities, far from the light-induced spin-state trapping region. We found evidence of photo-heating effects on the thermally-induced hysteretic response of this spin-crossover material, thus causing the shift of the thermal hysteresis to lower temperature regions. The experimental results are discussed in terms of the apparent crystal temperature and are analyzed theoretically using two evolution equations of motion, written on the high-spin (HS) fraction and heat balance between the crystal and the thermal bath. A very good qualitative agreement was found between experiment and theory in the stationary regime, explaining the experimental observations well and identifying the key factors governing these photo-thermal effects. View Full-Text
Keywords: spin crossover; heat transfer; photo-magnetism; optical microscopy spin crossover; heat transfer; photo-magnetism; optical microscopy
►▼ Show Figures 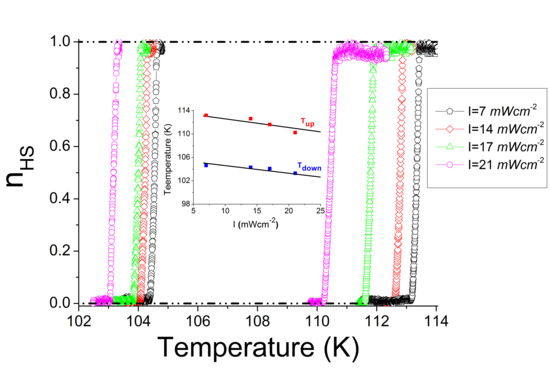