Insights into the Role of Fungi in Pine Wilt Disease

Wheat grains are colonized by complex microbial communities that have the potential to affect seed quality and susceptibility to disease. Some of the beneficial microbes in these communities have been shown to protect plants against pathogens through antagonism. We evaluated the role of the microbiome in seed health: in particular, against mycotoxin-producing fungi. Amplicon sequencing was used to characterize the seed microbiome and determine if epiphytes and endophytes differ in their fungal and bacterial diversity and community composition. We then isolated culturable fungal and bacterial species and evaluated their antagonistic activity against mycotoxigenic fungi. The most prevalent taxa were found to be shared between the epiphytic and endophytic microbiota of stored wheat seeds. Among the isolated bacteria, Bacillus strains exhibited strong antagonistic properties against fungal pathogens with noteworthy fungal load reduction in wheat grain samples of up to a 3.59 log10 CFU/g compared to untreated controls. We also found that a strain of the yeast, Rhodotorula glutinis, isolated from wheat grains, degrades and/or metabolizes aflatoxin B1, one of the most dangerous mycotoxins that negatively affects physiological processes in animals and humans. The mycotoxin level in grain samples was significantly reduced up to 65% in the presence of the yeast strain, compared to the untreated control. Our study demonstrates that stored wheat grains are a rich source of bacterial and yeast antagonists with strong inhibitory and biodegradation potential against mycotoxigenic fungi and the mycotoxins they produce, respectively. Utilization of these antagonistic microorganisms may help reduce fungal and mycotoxin contamination, and potentially replace traditionally used synthetic chemicals. View Full-Text
Keywords: biocontrol; stored wheat grain microbiota; epiphytes; endophytes; mycotoxigenic fungi; mycotoxins biocontrol; stored wheat grain microbiota; epiphytes; endophytes; mycotoxigenic fungi; mycotoxins
►▼ Show Figures 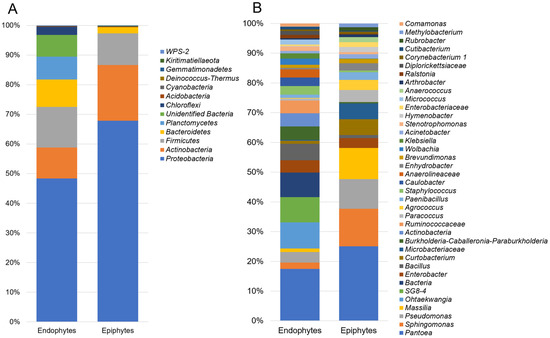