Plant roots support complex microbial communities that can influence nutrition, plant growth, and health. In grapevine, little is known about the impact of abiotic stresses on the belowground microbiome. In this study, we examined the drought-induced shifts in fungal composition in the root endosphere, the rhizosphere and bulk soil by internal transcribed spacer (ITS) high-throughput amplicon sequencing (HTAS). We imposed three irrigation regimes (100%, 50%, and 25% of the field capacity) to one-year old grapevine rootstock plants cv. SO4 when plants had developed 2–3 roots. Root endosphere, rhizosphere, and bulk soil samples were collected 6- and 12-months post-plantation. Drought significantly modified the overall fungal composition of all three compartments, with the root endosphere compartment showing the greatest divergence from well-watered control (100%). The overall response of the fungal microbiota associated with black-foot disease (Dactylonectria and “Cylindrocarpon” genera) and the potential biocontrol agent Trichoderma to drought stress was consistent across compartments, namely that their relative abundances were significantly higher at 50–100% than at 25% irrigation regime. We identified a significant enrichment in several fungal genera such as the arbuscular mycorrhizal fungus Funneliformis during drought at 25% watering regime within the roots. Our results reveal that drought stress, in addition to its well-characterized effects on plant physiology, also results in the restructuring of grapevine root microbial communities, and suggest the possibility that members of the altered grapevine microbiota might contribute to plant survival under extreme environmental conditions. View Full-Text
Keywords: black-foot disease; drought; high-throughput next generation sequencing; Vitis vinifera L.; water stress black-foot disease; drought; high-throughput next generation sequencing; Vitis vinifera L.; water stress
►▼ Show Figures 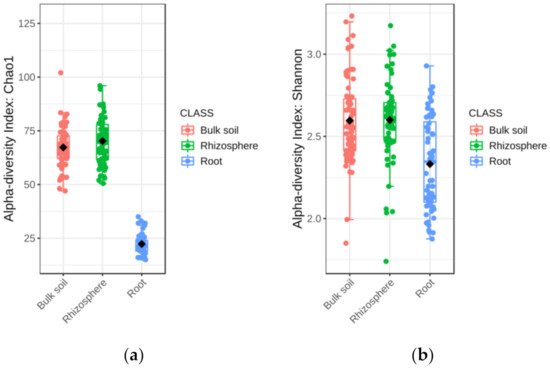