The genus Cantharellus, commonly known as chanterelles, has recently been divided into six subgenera; however, wider sampling approaches are needed to clarify the relationships within and between these groups. A phylogenetic overview of Cantharellus subgenus Parvocantharellus in China was inferred based on the large subunit nuclear ribosomal RNA gene (nrLSU), the DNA-directed RNA polymerase II subunit 2 (rpb2), and the transcription elongation factor 1-alpha (tef1). A total of nine species from China were assigned to the subgenus, including seven novel species, namely Cantharellusaurantinus, C. austrosinensis, C. galbanus, C. luteolus, C. luteovirens, C. minioalbus, and C. sinominior, and two known species, namely C. albus and C. zangii. The detailed descriptions and illustrations were provided based on the newly obtained data, with the comparisons to closely related species. C. zangii was restudied based on the paratype specimens and multiple new collections from the type locality. Futhermore, the Indian species C. sikkimensis was identified as a synonym of C. zangii based on the morphological and molecular analyses. A key to the Chinese species belonging to the subg. Parvocantharellus is also provided. View Full-Text
Keywords: chanterelles; molecular phylogeny; morphology; seven new taxa; taxonomy chanterelles; molecular phylogeny; morphology; seven new taxa; taxonomy
►▼ Show Figures 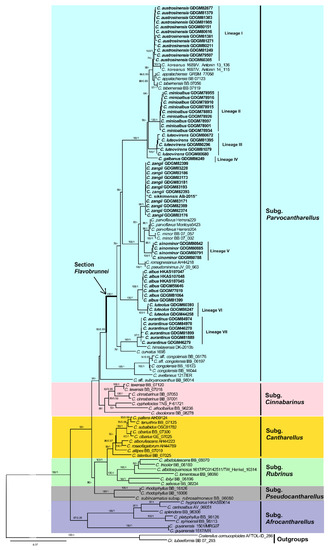